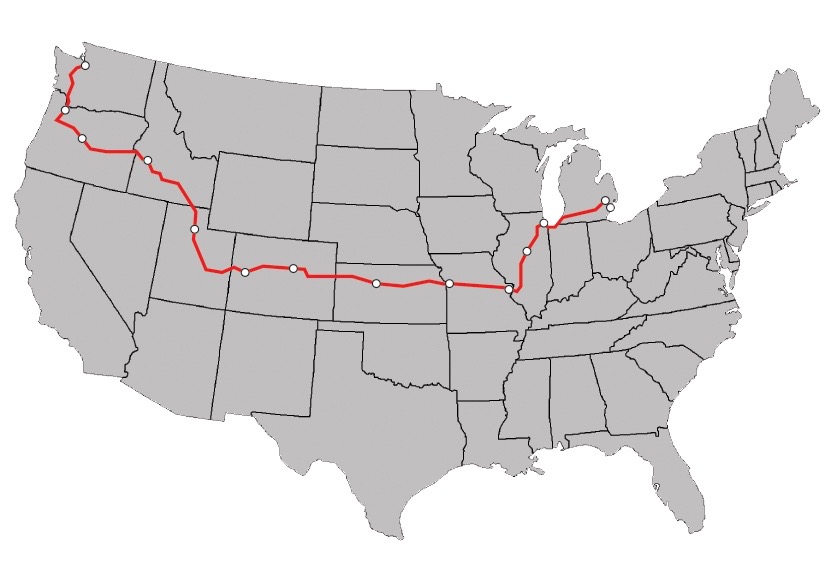 Madeira is chief executive of the Le May — American’s Car Museum in Tacoma, Washington, and Alberts is executive director of the North American International Auto Show, which is held each January in downtown Detroit.

Madeira and Alberts were trying to come up with an idea that would promote both the Detroit auto show and the museum well beyond either institution’s geographic area.

The long-time collaborators were sitting in an establishment that was decorated with photographs of Detroit in the 1950s, including some winter scenes, Madeira said in explaining how he came up with the idea for what’s being termed “The Drive Home.”

“Let’s celebrate post-war American cars and Detroit at its height in the 1950s and ’60s and everyone being confident after World War II, and the renaissance that is taking place in Detroit and the resurgence of the U.S. auto industry that’s taking place right now,” Madeira said.

The plan is that on December 27, three cars from the museum — a 1966 Ford Mustang, a 1957 Chevrolet Nomad and a 1961 Chrysler 300G — will leave the museum on an 11-day drive to Detroit. Classic car gatherings are planned along the route and, pending an overpowering snowstorm that would stop the cars in their tracks, the caravan of classics arrives in Detroit on January 7 for the start of the auto show.

“Growing up in the ’50s and ’60s, everybody just drove,” Madeira said. “It didn’t matter if it was snowing, you put cardboard in front of the radiator, put a bag of sand or a couple of cinder blocks in the trunk, and you have chains (to put on the tires for traction if needed).”

Madeira is no stranger to unusual cross-country trips. The lawyer-turned-college executive-turned-museum-head who has ridden motorcycles across 25 countries, including those in southeastern Asia, remembers owning a Ford Falcon that he drove from Chicago to Boston in a blizzard.

“The high-beam switch was on the floor but there was so much water from melting ice that every time I’d hit the high beam, I’d short circuit it and fire would shoot up and I’d have to stomp it out,” he said.

The idea, he added, was to celebrate the way it was, “and to have people journey with us along the way, or at least bring out their cars for events. Let’s have this meandering festival across America.”

The route runs from Tacoma to Portland, Boise, Salt Lake City, Grand Junction (Colorado), Lakewood (the Denver suburb where the LeMay has a Club Auto affiliate), Hays (Kansas), Kansas City, St. Louis, Bloomington (Illinois), Chicago and Birmingham (Michigan), from where the cars will travel down historic Woodward Avenue to the auto show in Detroit’s Cobo Hall.

Madeira already has heard from someone who plans to drive his own ’60s Mustang from KC to St. Louis with the group, and several car clubs, including a Porsche club in Salt Lake City, are planning cars-and-coffee style events in conjunction with the route.

“It will be interesting to see how many people actually bring their old cars out,” Madeira said.

Yes, Madeira has been challenged by people who would never expose a classic to winter weather and salted roads.

“But there’s an easy answer,” he responded, “Cars are meant to be driven. It’s wrong for a car to just sit in a museum dying.”

And, he added, “It’s not like I’m taking Peter Brock’s Daytona Coupe of a 30-something Alfa that won at Le Mans.

“And we’re also taking some precautions,” he said, noting that front ends and rocker panels and other susceptible areas of the car will be covered with clear vinyl material to help protect them from road salt.

The cars also will be thoroughly washed in Detroit and again when they get back to the museum.