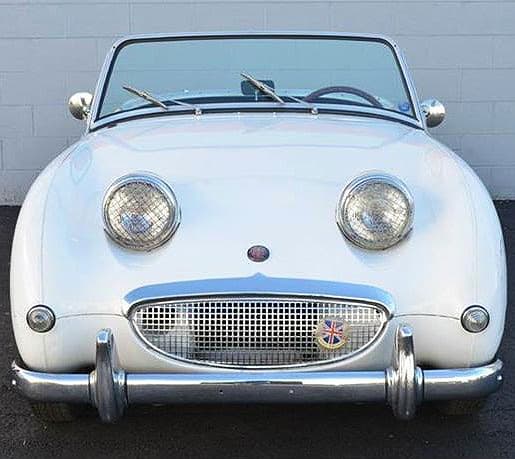 During most of the 1950s, there were not any inexpensive sports cars. If you wanted a cheap sports car, you had to buy one used, and typically a car that was far from perfect. But in the late 1950’s, Donald Healey had the idea to create a sports car for the people, which would be affordable, something that was fun to drive, easy to service and distinctive looking. The car he gave us was the Austin Healey Sprite, known as the “Bugeye” in the US or “Frogeye” in the UK.

The Sprite is a fun car to own and possibly the most basic sports car of all time. The tiny roadster has nothing extra, no roll up windows and a very basic top; it doesn’t even have outside door handles. It is the idea of a sports car reduced to its most elemental parts.

Although stripped down, the Sprite had one important quality that set it apart: it was incredibly fun to drive. As a result, they sold like hotcakes at a church breakfast.

The Pick of the Day is this 1959 Austin Healey Bugeye Sprite located in Lawndale, California. According to the seller’s ClassicCars.com listing, the Bugeye is a well-sorted example and in its original color combination of Old English White with a factory-original red interior.

The seller also states that this example has had a desirable disk-brake conversion. Something we like is that the seller discloses up front that the floors of the car are original and have some thinner areas.

This Bugeye looks to be a nice and honest example and a good deal at the asking price of  $12,750.

While not a perfect car, we think it is a usable Bugeye. All we would do is repair the floors with good replacement panels from Moss Motors or another reliable source, get behind the wheel and drive and enjoy this car as it was intended.

There are few better first-time classic sports cars than the Bugeye Sprite due to inexpensive replacement parts, the ease of working on them and how much fun they are to drive.