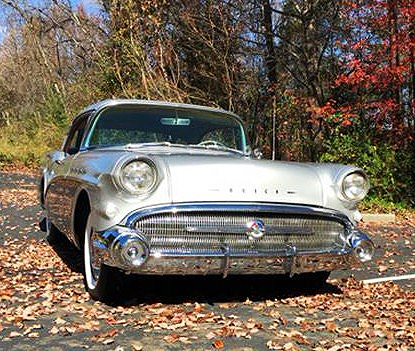 Hardtops were all the rage in the 1950s, with designers topping big cars with stylish pillarless rooflines that looked both graceful and sporty. Most were two-door hardtops, but there were some great four-door sedans and even an occasional station wagon that received the wide-open treatment.

The Pick of the Day is a sharp-looking four-door hardtop, a 1957 Buick Special presented by the seller as a fully-restored, low-mileage car with all the trimmings. The shapely roofline accentuates the sculptural body lines, while the four-door configuration looks well-integrated.

Detroit was on a styling roll in the mid-50s, with the entire General Motors lineup from Chevys to Caddys getting bright new designs under the leadership of the great Harley Earl, considered to be the father of American automotive design. The Buick’s dramatic wraparound windshield was one of Earl’s many innovations.

The Greenville, South Carolina, dealer listing the Buick on ClassicCars.com describes it as a numbers-matching car driven just 48,000 miles that has been treated to a “top-notch paint job…new mirror-finish chrome bumpers, grille, badges and trim…new complete interior and headliner…(and) new whitewall tires.”

The original 364cid Nailhead V8 engine has been “refreshed,” the seller says, and it “runs perfect and sounds great.”

The Buick sounds like a bargain at the asking price of $22,700, but four-door cars of this era generally go for less than their two-door siblings. This one looks like a beauty, though, that should attract plenty of attention, plus the appreciation of back-seat passengers who get their own doors for more-dignified entry and exit.