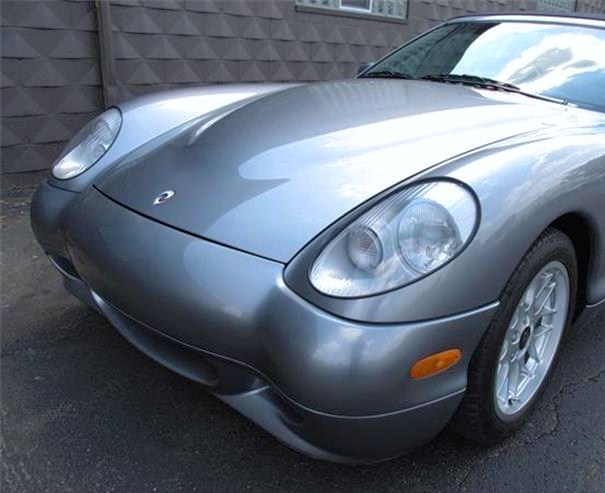 I have always had a soft spot for limited production sports and GT cars, especially ones of the affordable variety. The most common of these are cars from Jensen, TVR, Peerless, Elva, Moretti and the like. One thing these cars have in common is that they are all European. I have tried to love the limited-build Avanti GT but just cannot get my head around the styling.

But the cars from one limited-production American brand, Panoz, tick all the boxes for me, specifically the Panoz Esperante.

The Pick of the Day is this silver 2002 Panoz Esperante located in Troy, Michigan. The Esperante has an all aluminum body and a steel, aluminum and carbon-fiber chassis, backed up by a 4.6-liter Ford SVT Cobra V8. These cars are very special and this one looks like a great example. According to the seller advertising the car on ClassicCars.com, it is a one owner example with 7,300 miles from new and has been well cared for and maintained since new.

One of the pictures with the ad shows a plate with the signatures of every person who was involved in the construction of this car, something affixed to every Panoz. It is a nice touch and makes these special cars seem all the more exclusive. The color combination of silver with black leather suits this car nicely, and is a welcomed change from the jellybean colors of yellow and red seen on so many of these cars.

The brainchild of Don Panoz of IMSA racing fame, these are truly hand-built American cars that offer great styling, racing pedigree, incredible performance and high quality. There was just one problem with the Esperante when new, and that was its price tag: more than $90,000. That may not seem like a lot of money compared with other limited-production sports cars, but it was a lot to spend on a new and untried design from a brand-new company, especially one not located in England, Germany or Italy.

As a result, few Esperantes were built and prices on the secondhand market quickly fell to less than half the cost when new. While not a good thing for Panoz as a company, this depreciation represents a great buy for collectors.

Panoz is releasing a new version of the Esperante this year, and that should only help with the future collectible value of these cars.

Well built when new, encompassing the best of old and new technology, inexpensive to maintain with stunning performance and very good looks, we think the Esperante has everything needed to become a serious future collectible. At the asking price of only $39,850, we think this Panoz is a no brainer if you are looking for something different while still celebrating American cars.