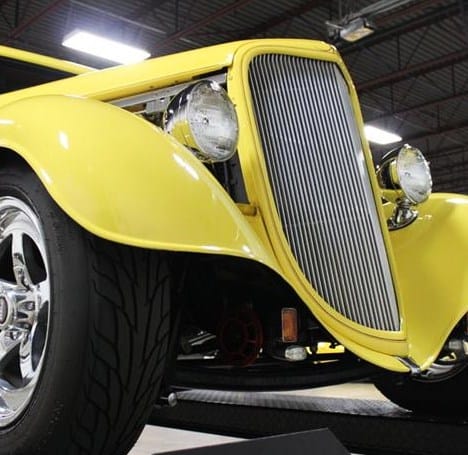 The ’34 Ford custom coupe, powered by a Chevy 350 V8, has won a number of Super Chevy Shows in Ohio

In honor of SEMA week, when the entire world of aftermarket automotive goodies crowds its way into Las Vegas, the Pick of the Day is a classic street rod that was hand-built using many of the products found at SEMA.

The 1934 Ford three-window coupe is a full-fendered chop top with a rakish stance that “was built to be a show car but it also gets its fair share of cruising,” the Grand Rapids, Michigan, dealer says in the ClassicCars.com listing.

“Some of its show-winning accomplishments include three consecutive 1st place wins at the 2005, 2006, and 2007 Super Chevy Shows in Columbus, OH and a 2nd place finish at the 2012 Detroit Autorama in the ultra-competitive 33-34 class,” the seller says. “It was also the cover vehicle on the Jegs Christmas 2002 catalog.”

The Ford’s fiberglass body has a 3.5-inch roof chop

Performance equipment includes a 350cid Chevy V8 with a Weiand supercharger, Edelbrock carburetor, mild cam, headers and Flowmaster 40 mufflers, resulting in 425 horsepower, the seller says. The power is fed through a Turbo 350 three-speed automatic transmission with a B&M cooler and a 9-inch rear with 3:55 gear ratio.

This cool-looking and undoubtedly fast custom classic is priced at $43,900, which sounds like far less than it must have cost to build. The car was also built to be driven, the seller adds.

“With just slightly more than 13,000 miles, this show piece is not a trailer queen but looks like one as it continuously turns heads and wins shows,” the seller says.