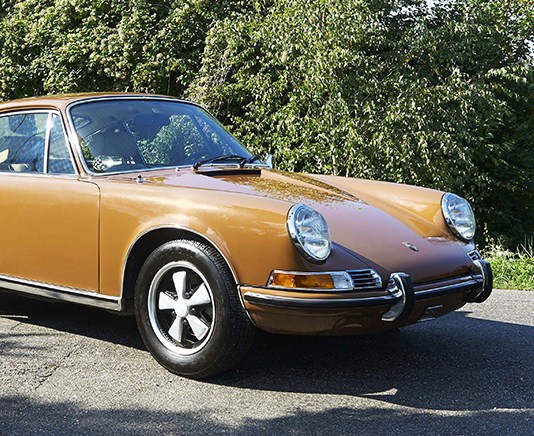 Yet another Porsche 911 with a Steve McQueen connection comes up for sale next month during a Paris art auction presented by Christie’s.

The brown 1971 Porsche 911T coupe used by McQueen’s production company during filming of the landmark racing movie Le Mans, and then owned by German film star Elga Andersen, is described by the auction house as being in “exquisite condition” with just 46,350 kilometers, or 28,800 miles, showing on its odometer.

After the astounding bumps in auction prices for cars once owned by McQueen –- the 1970 Porsche 911S shown in the opening sequences of Le Mans sold in 2011 for $1.375 million, and a 1976 Porsche 930 Turbo Carrera that was special ordered and driven by the late film icon sold in August for an incredible $1.95 million –- expectations are that this 911T also could bring a sky-high result despite having only a tangential connection with McQueen.

The 911T will be brought up for sale at a high-end auction of art objects rather than a collector-car auction when it crosses the block November 4 at Christie’s Exceptional Sale in Paris.  The Porsche will be the only automobile presented during the auction of paintings, sculptures and antiques.

The Porsche was purchased by McQueen’s production company, CBS Solar Film Studios, from the garages of legendary Swiss racing driver Jo “Seppi” Siffert, Christie’s says in the auction description. Siffert, twice a winner at Le Mans and the driver for the movie’s action shots of the Porsche 917 race car of McQueen’s Michael Delaney film character, also provided the Porsche 908 and 917 seen on the track as well as a fleet of sports cars (including four Porsche 911s and a 914), which were used by the crew during shooting of the film.

After completion of Le Mans, McQueen took home the 911S used in the opening sequences and gave the 911T to his co-star, Elga Andersen, with whom McQueen was also having a well-publicized affair.  She kept the Porsche until her death in 1994, when the car was left to her best friend, who subsequently sold it to the current owner.  Christie’s says that documentation and photographs come with the car.