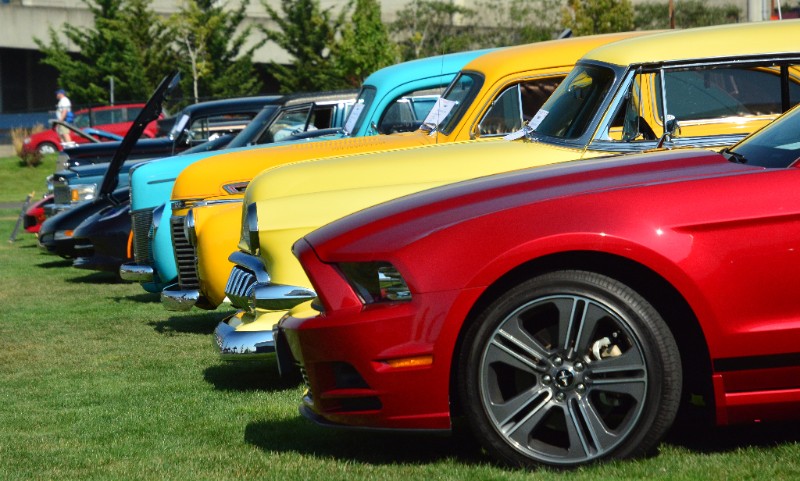 Harold Cleworth, known as the “painter laureate of the car” and his “super realism” paintings, will share his life story and his passion for cars and art in a presentation Saturday at 2 p.m. at the Le May museum in Tacoma, Washington.

The LeMay also has scheduled a trunk-or-treat event October 24 at the Marymount Event Center in Tacoma, where children will be able to trick-or-treat by going from car trunk to car trunk.

On October 10, the Auburn Cord Duesenberg Automobile Museum presents a 1915 Westcott Model 42 as part of it monthly “If These Cars Could Talk” series. Presentations will take place at 11:00 a.m. and 3:00 p.m. at the museum in Auburn, Indiana.

Through October 30, the ACD’s traveling community exhibit, the “Women Workers of the Auburn Automobile Company,” will be at the Cupbearer Café in downtown Auburn. The exhibit includes photographs of women working in the Auburn Automobile Company. One goal is that some of the women in the photographs will be identified by relatives, neighbors or family friends so their legacy can be preserved.

The Blackhawk Museum stages its Pre-War Classics “Picnic on the Plaza” show Saturday, October 10. The event is open to all pre-1941 cars, and the museum encourages participants to dress in period attire.

October 9-11 is the 11th annual Barber Vintage Festival at the Barber Vintage Museum in Birmingham, Alabama, featuring the Britten family and Britten motorcycles.

Also this weekend, October 10-11, the Owls Head Transportation Museum in Owls Head, Maine, celebrates its last outdoor event of the season. The “History Comes Alive” show will provide spectators with options to ride in a Model T, free family activities, and all pre-1995 vehicles are welcome to show.

The museum also seeks quality donations for a flea market to be held October 31, and for the Great Fall Auction on November 1, including tools, classic vehicles, collectibles, art and antiques.

The National Corvette Museum in Bowling Green, Kentucky, has teamed with the Kentucky State Police for a scenic road tour with stops at Abraham Lincoln’s Birthplace, the Rosemary Clooney House, Newport Aquarium, Carter Caves and more. Meals and accommodations are included in the registration fee of $950 for members, $990 for non-members. Tours will be October 12-17, 19-24, and 26-31.

The World of Speed Museum in Wilsonville, Oregon, features movies on the big screen in the main indoor gallery. Movies start at 7 p.m. and prices are $2.50 for members and $8 for non-members. Movies are: October 16, Bullitt; October 30, Christine; November 20, Cars; and December 11, Talladega Nights.

In addition to the movies, for the next few months two Aston Martins will be on display at the museum, a 1960 Aston Martin DB4GT and 1961 DB4GT Zagato.

The California Automobile Museum in Sacramento will hold its “Third Thursday Sketch and Sip” on October 16. Local wines will be served and Ron Vogel and Anna Baum, both automotive artists, will be on hand to teach participants basic designs of automobiles.

Beginning October 17, the Heritage Motor Centre in England offers a series of lectures and workshops, starting with“Drawing from Automotive History” led by art teacher Richard Cook, who will provide tips for drawing automobiles. On October 24 is “Cars through the Lens,” focusing on automotive photography. On November 29, there will be a presentation called “The story of our gas turbine car.”

On October 25, the America on Wheels museum in Allentown, Pennsylvania, will host a Trunk or Treat event from 1 to 3 p.m. Craft tables will be on site to decorate treat bags.

The Studebaker National Museum celebrates 10 years in its current location from October 26-30 and is sharing birthday cake with all the museum visitors. Additionally, the museum is giving away several 2015 cars and SUVs in an raffle. Cars being raffled include a Toyota Camry SE, Volkswagen Passat 1.8T, Lexus CT Hybrid, Jeep Wrangler Unlimited Sport 4×4 and Ford Escape Titanium. Tickets can be purchased at the museum or over the phone until 5 p.m. December 8. The drawing takes place at 6 p.m. on December 8.

October 31, the National Automobile Museum in Reno, Nevada, holds a “trick or treat” in the streets of the museum and will have 16 candy stations, Halloween-themed games, and a magic show. The event takes place from 4:30 p.m. to 7:30 p.m.