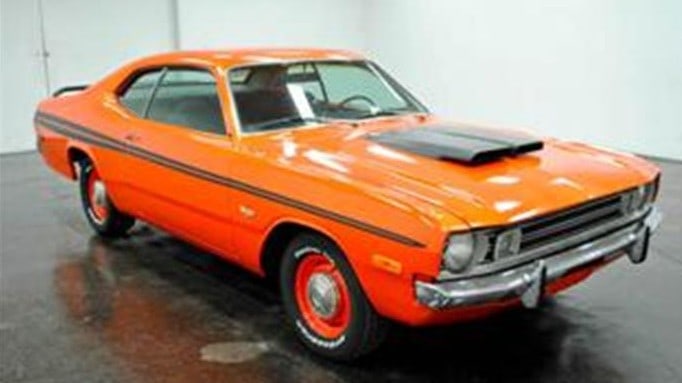 If a jack-o-lantern swallowed a race car, the byproduct would be this 1972 Dodge Demon. Essentially a standard Dart sedan with a sporty two-door resemblance to the Plymouth Duster, the Dodge Demon had some bite to it. Back in the day, these cars weren’t necessarily fast muscle machines, or on the same playing field as Mustangs, Camaros, and Challengers, but they were regarded as economy performance cars.

This particular 1972 Dodge Demon listed on ClassicCars.com has a certain kinda performance to add to its style, making it our Pick of the Day.  According to the private seller in Anthem, Arizona, the Demon has been well-maintained and retains original parts with less than 68,000 miles on the original motor, a 318 cid V8 mated to a 727 Torque Flight automatic transmission.

This Demon recently has had a new coat of bright orange paint, which contrasts well with its black hood scoop and side stripes. The current owner says that “despite the show-ready look, some minor work is required.” That work includes some “very minor rust issues” and the original stereo is intact but not currently working. The gas gauge doesn’t work properly either. The owner also notes there are no seat belts installed in the car.

The Dodge Demon is being offered for $15,000 by the owner, who can provide more detailed information and photos upon request.