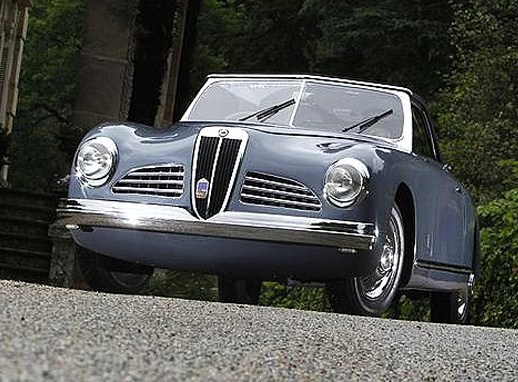 One of the most remarkable cars crossing the block at the Dragone auction October 17 in Westbury, Connecticut, is the 1947 Lancia Aprilia prototype, which comes with a wonderful back story loaded with determination, defiance and new beginnings.

Italy was in shambles immediately after World War II and its wartime alliance with Germany made it an international pariah in many respects. But for Italy’s famed auto design and coachbuilding houses, or carrozerias, that were emerging from under the rubble, the rebirth of their artistry was testament to the bright possibilities of a Europe at peace.

Gian Battista “Pinin” Farina was already established as one of the great automotive designers before the war, and he was determined to return to that status. So he turned his sights on the Lancia Aprilia, a small Italian car that had proven popular among coachbuilders, although Pinin Farina wanted his to take a totally different approach.

According to the vehicle description presented by Dragone in its sales catalog, Pinin Farina’s design for his Aprilia prototype was to put the passenger compartment centrally located over the chassis behind a short hood, rather than the standard practice for a sporting car of placing the driver and passenger far back behind a long hood. The result was an elegant and shapely cabriolet that heralded a new look for post-war design.

Pinin Farina decided that his Aprilia prototype, along with a spectacular Alfa Romeo 2500 concept, needed to be shown at the upcoming Paris Motor Show. But there was a problem. Because of Italy’s role in the war, it was barred along with Germany from presenting automobiles at the important showcase. But Pinin Farina had his own way of making things happen.

The designer set off from Turin for Paris in the gleaming show cars, with Battista at the wheel of the Lancia and his 20-year-old son, Sergio, driving the Alfa. According to his memoirs, people along the route stared with astonishment at the brightly gleaming automobiles, which must have seemed like a glint of sunshine after years of war and deprivation.

The Farinas were indeed turned away when they reached the Grand Palais, so the designer set up his own display in front of the entrance to the motor show, where he showed his two very special cars parked on the street in what he referred to as his “anti-salon.” Those stunning coachbuilt cars were in stark contrast to what show goers found inside the Grand Palais: a dour display of pre-war sedans and other utilitarian vehicles that definitely lacked the bold panache of Pinin Farina’s creations.

“The renowned magazine l’Illustration decided to produce its special first Motor Show edition,” the Dragone description reads, “and to pay tribute to the talent and trial against adversity of this impetuous designer: the Lancia and the Alfa Romeo (in the background) were given pride of place on the cover.”

The Aprilia protoype remained in France, where it was registered by a company named Roblou, a Paris importer of Lancias. The car was shown several more times, notably at the Geneva Motor Show.

The prototype was rediscovered in 2010 in the north of France by well-known Belgian auto dealer Bernard Marreyt, according to Dragone, who had the car professionally restored to original in Pisa, Italy, a project that took three years. The car was sold to its current owner and has been run just 80 kilometers (about 50 miles) since its restoration.

“Pinin” Farina went on to establish one of the greatest carrozerias of all time and became so well known that the president of Italy changed the family’s last name from Farina to Pininfarina.

In July 2013, the newly restored Lancia prototype was part of a special tribute to Pininfarina held near London. During the celebration, Sergio’s son, Paolo, took the wheel of the historic car for an emotional public drive.

The 1947 Lancia Aprilia prototype, with a pre-auction estimated value of $450,000 to 500,000, will be offered during Dragone’s sale October 17 at the company’s headquarters in Westbury, where a wide array of more than 60 collector cars will be available. For more information, see the auction website.