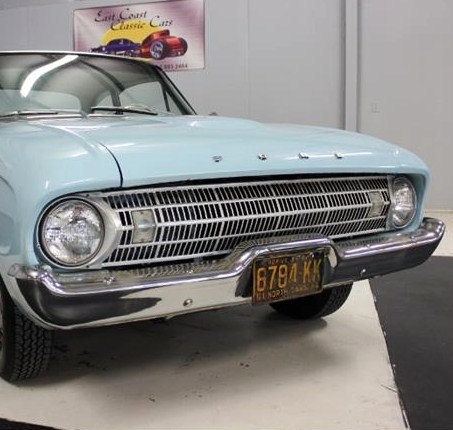 The 1961 Ford Falcon is described as a survivor in original, low-mileage condition

OK, I admit it. I’m a sucker for Ford Falcons, most likely because my mom owned a ’63 Falcon sedan during my formative years. Although mom bought hers not because she thought it was cool but because it was the cheapest car she could find.

So the Pick of the Week is something of a blast from my personal past, a low-mileage 1961 Ford Falcon Futura that the classic car dealer in Lillington, North Carolina, describes as a clean, all-original survivor in remarkably preserved condition.

The Futura upgrades add to the Falcon’s trim and details

“This is a two-owner car with 36,895 original miles,” the seller notes in the listing on ClassicCars.com. “Painted blue with a white top, it has a single outside mirror on driver’s side. Original hub caps, front and rear bumper, emblems, window trim. Tires are like new. Tail lights, side trim, door handles, grille all look good. This is a good looker.”

Mom’s Falcon was a stripped-down, base-model four-door – it didn’t even have a radio – painted a sort of murky brownish-gold color, which in her opinion would not show the dirt as much. But my brother and I thought it was most excellent, and we both learned to drive on it, much to the mirth of our sports-car/muscle-car buddies.

This is the Falcon that I wish we’d owned back then, a baby-blue two-door with the Futura upgrades that include a sporty interior with bucket seats and a console. It has the bigger six-cylinder engine, dubbed the 170 Special, that generated more than 100 horsepower rather than the pathetic output of the smaller base engine (mom’s Falcon had the 170 Special only because by ’63, they’d stopped offering the smaller six).

The Falcon looks pretty sharp in the extensive photo gallery presented with the ad, definitely old but seemingly freshened up with a professional detail and polish. The chrome and stainless trim appear clear of corrosion, although the steering-wheel horn ring looks pretty well shot.

From the description, it sounds like the Falcon has been mechanically sorted and is ready for the road, although one thing I would swap out is the single-bore master cylinder for an updated double-cylinder unit for safety’s sake. I hate it when the peddle hits the floor, as it did once in mom’s car while I was driving in traffic. Luckily, I didn’t hit anything, but I can do without that kind of adrenaline rush.

For some folks, this Falcon might look like a template for a custom hot rod, but I would want it stock, although a Ford 302 V8 and four-speed stick shift (instead of the slushy two-speed automatic) would be the desired upgrades. I would leave its appearance as is, however, especially with those groovy tri-color hub caps.

The price is certainly right at just $9,000, which has me pondering a trip back east to North Carolina culminating in a memorable cross-country drive to Phoenix. I could take one of my now-grown sons for his own Falcon awakening. Or as one of them once said: “You want to be Rain Man or the other guy?”