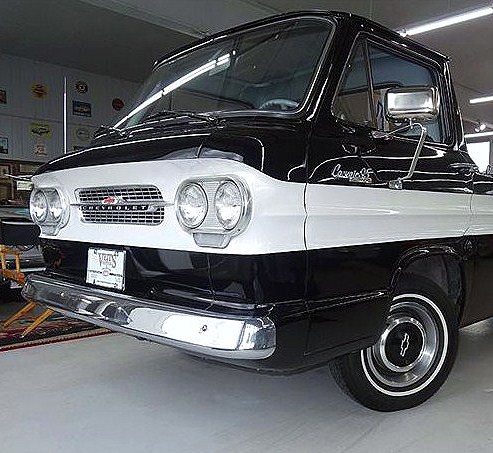 The 1960 Corvair was an all-new kind of vehicle for Chevrolet, a rear-engine, air-cooled car aimed directly at the popular Volkswagen beetle. For 1961, Chevy took another shot at Volkswagen with the Corvair Series 95 van and pickup truck to compete with VW’s bus and pickup.

The Pick of the Week is a rare 1961 Chevrolet Corvair Rampside pickup being offered by a dealer in Davenport, Iowa, who describes it as the “upscale Deluxe version (with) chrome bumpers, mirrors, grille and hubcaps, and a color-keyed interior to match its two-tone black on white paint scheme.”

Corvair pickups were built for just three years and are fairly rare today. With their funky cab-forward design and Space Age styling, they are an interesting (and more-powerful) collector-car alternative to the similar VW pickups. The Series 95 designation referred to the Corvair trucks’ 95-inch wheelbase.

The pickup listed on ClassicCars.com is in good-running and presentable condition after a “nice but amateur older restoration” with 11,000 miles driven since, the dealer says in the description. It is equipped with the 80-horsepower flat-six engine and four-speed manual transmission, and offers about twice the engine performance of the VW pickup.

The Rampside configuration was also adapted from VW. It gives the driver the capability of loading the pickup from the right side parked at the curb, which was a tremendous advantage for delivery vehicles. The seller notes, “These were used by the Bell Telephone Company because loading and unloading of cable drums was eased by the side ramp.” It was a simple and elegant solution.

The 145-cubic-inch engine is located under the cargo deck, which has a raised hump rather than a flat floor to accommodate the low-profile engine and its access panel.

The Corvair pickup is priced at $13,900, which is a cheap entry point for a unique and eye-catching classic vehicle, plus eligibility to the numerous and active Corvair clubs across the country.