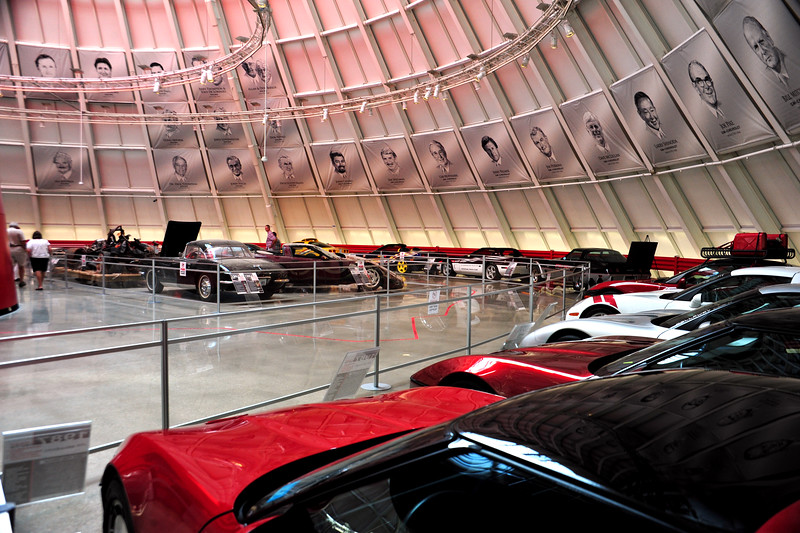 ‘When life hands you lemons” the headline reads on the news release from the National Corvette Museum, which on Thursday morning plans to officially reopen its Skydome as part of the museum’s annual Labor Day weekend anniversary celebration.

The reopening occurs a little more than 18 months after the floor beneath the Skydome fell in, quite literally, and plummeted eight of the Corvettes on display into the abyss.

Sinkholes are not unusual in western Kentucky, where the museum’s location in Bowling Green is just across the road from the assembly plant where all Corvettes are produced. But the sinkhole that swallowed those eight cars was large even by local standards.

Manhole cover provides a view into what remains of the sinkhole

The first reaction was one of relief; the collapse had occurred a few hours before the museum was scheduled to open that morning and no one was in the Skydome to suffer injury, or worse.

The next steps were among the most impressive response to such a catastrophe in the history of American museums as the staff set out not only to work with experts on securing and repairing the damage but to find a way to, indeed, turn lemons into lemonade.

Someday, the Harvard Business School should do a case study on the amazingly honest and open public-relations effort that not only kept the media and the public informed on a seemingly daily basis, but on the response of the Corvette community which came to the museum in record numbers to see what it could, and provide contributions to help fund the recovery effort.

That effort not only includes repairs and restoration of some of the damaged cars, but a new, cave-like exhibit in which visitors not only can learn about the local geology and the specifics of the Skydome sinkhole, but in which they can feel and hear what it might have been like in the Skydome that morning.

“The latest 360-degree computer imaging projectors and animation, powerful transducers that shake the walls, terrific sound systems and air rush effects will complete the experience,” the museum promises in its news release about the new “Corvette Cave In! The Skydome Sinkhole Experience.”

Also new and another part of the repair effort is a 48-inch cave-access manhole in the Skydome floor. The manhole was made with a glass window so visitors can peer into the portion of the cave that did not need to be filled in.

The Skydome ribbon cutting and reveal is scheduled Thursday at 8:45 a.m., to be followed at 9 a.m. by a presentation by John Cafaro of GM Design and David Bolognino, director of GM Design fabrication operations, on the restoration of the Blue Devil and One-Millionth Corvettes.

At 10 a.m., Jason Polk, professor at Western Kentucky University’s Center for Cave and Karst Studies, will give a presentation on “What’s Under the Skydome?” and at 11 a.m., Zach Massey of Scott, Murphy & Daniel Construction will share details of the Skydome and sinkhole repair effort.

The Skydome reopening is part of the museum’s 21st anniversary celebration, which also includes the induction of Rick Hendrick, Herb Fishel and Russ McLean into the Corvette Hall of Fame. For a complete schedule of anniversary weekend events, at the museum and the new motorsports park, see the museum’s anniversary website.