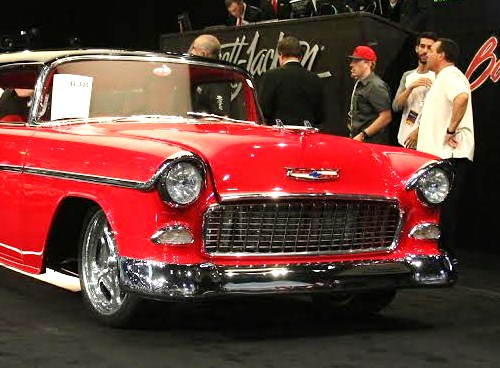 After three years of holding collector car auctions in Reno, Nevada, during Hot August Nights, Barrett-Jackson told city officials Wednesday that the auction would not return in 2016.

“While the past three years have been a great and exciting run, we will not be returning to Reno Tahoe as part of Hot August Nights in 2016,” Craig Jackson, chairman and chief executive of Barrett-Jackson, said in a news release. “It was a difficult decision and I am thankful of all the hard work and dedication that Hot August Nights, the community, and all those involved put forth to make the events memorable and exciting.”

No specific reason for the decision was given by Barrett-Jackson, but auction observers have said that the Reno auctions have fallen short of expectations.

The Barrett-Jackson association with Hot August Nights – a weeklong festival of classic and custom cars in the Reno, Sparks and Tahoe area – seemed like a match made to order when the Scottsdale-based auction held its first sale at the Reno-Sparks Convention Center in 2013. Barrett-Jackson auctions specialize in muscle cars, classics, customs and hot rods, and the fit seemed perfect.

Barrett-Jackson even established a prestigious, high-dollar custom-car competition held during Hot August Nights with the winner awarded the Barrett-Jackson Cup, as well as cash and a number of car-related prizes. Four runner-up prizes also were awarded.

Barrett-Jackson’s recent auction in Reno resulted in sales of $9.5 million in the 100 percent sell-through rate of 232 vehicles and 400 pieces of automobilia, the auction house reported shortly after the sale held August 6-8.

Barrett-Jackson made a change for this year’s sale designed to raise attendance by conducting it during the daytime instead of the evenings when it had to compete with Hot August Nights events. The auction reported attendance of 40,000 for the most recent sale, an increase compared with previous years.

Hundreds of thousands of participants flock to the Reno-Sparks area every year for Hot August Nights, a celebration of cruising, car shows and music, which in 2016 celebrates the 30th anniversary of the area’s largest special event.

“We’ve enjoyed our partnership with Barrett-Jackson,” Christopher Baum, Reno Tahoe USA president and chief executive, was quoted in the Barrett-Jackson news release. “They held successful events here during one of the nation’s top classic car festivals, Hot August Nights, and northern Nevada benefited from the national coverage provided by such a prestigious auction.”

“We had a good partnership with Barrett-Jackson, but we have options for other auction companies and we’ll move ahead with planning for our 30th anniversary event,” Whan was quoted in the newspaper article.

Whan also said that Hot August Nights would continue holding a custom-car competition, changing its name from Barrett-Jackson Cup. Barrett-Jackson has not announced plans for resuming its competition at another venue, although it is expected to continue during one of the company’s other auctions.

Reno was the fourth annual auction held by Barrett-Jackson, which mounts its flagship home auction in Scottsdale every January; the Palm Beach, Florida, auction in the spring; and Las Vegas in the fall.