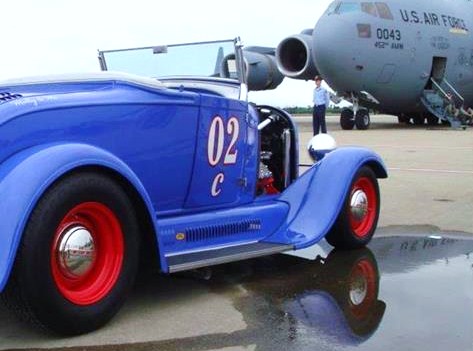 “Dry lake” means something different in Southern California than it does in the rest of the world. Speed-obsessed hot rodders since the late 1940s have viewed the flat, dusty expanses of prehistoric lake beds as perfect places to go fast, fast enough to break records, and to do so in an automotive style that created an entire subculture.

During our recent drive back from Monterey Classic Car Week to Phoenix on back roads across the Mohave Desert, we spotted quite a few of these eerie landscapes. It was easy to visualize speed-record cars roaring across the dry lake beds, kicking up tall rooster tails of dust behind them.

The Pick of the Day is a celebration of dry-lake history, a 1929 Ford Model A roadster that pays homage to the pioneers of speed-record chasing. It was built in the 1980s by two-time world-land-speed record holder and 200 MPH Club member Butch Philips of Riverside, California, and was formerly owned by noted historic racer and street-rod builder Phil Braybrooks, according to the car’s listing on ClassicCars.com.

The roadster is offered for sale by an Orange, California, classic car dealer, who says in the ad, “This Roadster exemplifies an era when they transformed from weekday driver to weekend racer, and is an iconic example of a true American Hot Rod. Since acquiring, all efforts were made during restorations, safety and engineering upgrades, to retain Butch’s signature of “stout simplicity” while preserving the most formative years of hot rodding.”

Powered by a classic Ford flathead V8 engine fitted with triple Stromberg carburetors and Edelbrock heads and manifold, the Model A has been totally restored after being rediscovered resting for decades in an airport hangar. Upgrades include Borg-Warner five-speed manual transmission, disc front brakes and electronic ignition, with the original distributor kept for the future owner.

The paint, pinstriping and interior are all original, says the seller, who adds that the roadster is “seriously fun to drive.”

The asking price seems pretty strong at $89,500, although this hot rod really is a piece of history, and it appears ready to be enjoyed on the street or else driven out to a dry-lake course to raise a rooster tail of its own.