First, the seller of this 1976 Cadillac Eldorado convertible starts the advertisement on ClassisCars.com by thanking you for just looking at the ad. Then, after a long paragraph of describing the vehicle, comes the note that while the current curator is the third owner, he or she has knowledge of the car since it was brand new.

Not that it looks very old even after nearly 40 years. After all, the car has been driven a mere 12,449 miles since new, which was back in the year that the United States was celebrating its bicentennial.

Speaking of celebration, these big convertibles are veritable parade floats with plenty of room to carry not only the homecoming king and queen but their entire court.

Plus, the seller adds, “This original California car has always been garaged, no rust issues. “

The car is unrestored but its original dark-red Fire Mist paint “is in very good condition with only some minor flaws,” the seller assures, plus the car has a new white convertible top and glass rear window.

The seller says the trim and brightwork are complete, the windows all operate smoothly, and the interior is finished in red leather in “good condition, no tears, carpet is good, dash and door panels are in excellent condition, no cracking, all interior lights are operating correctly.” 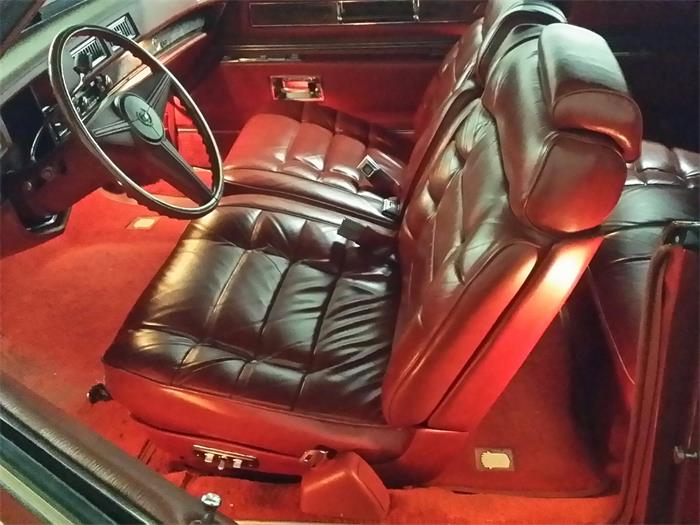 The seller says the factory-installed 500-cid V8 engine “runs very smooth and quite” and has been regularly serviced — oil, filter, belts and plugs. The tires are new, and there’s a spare and jack in the trunk.

“This car has always been garaged and lived in California car since new.”

Even in a non-bicentennial year, that’s reason enough to celebrate.