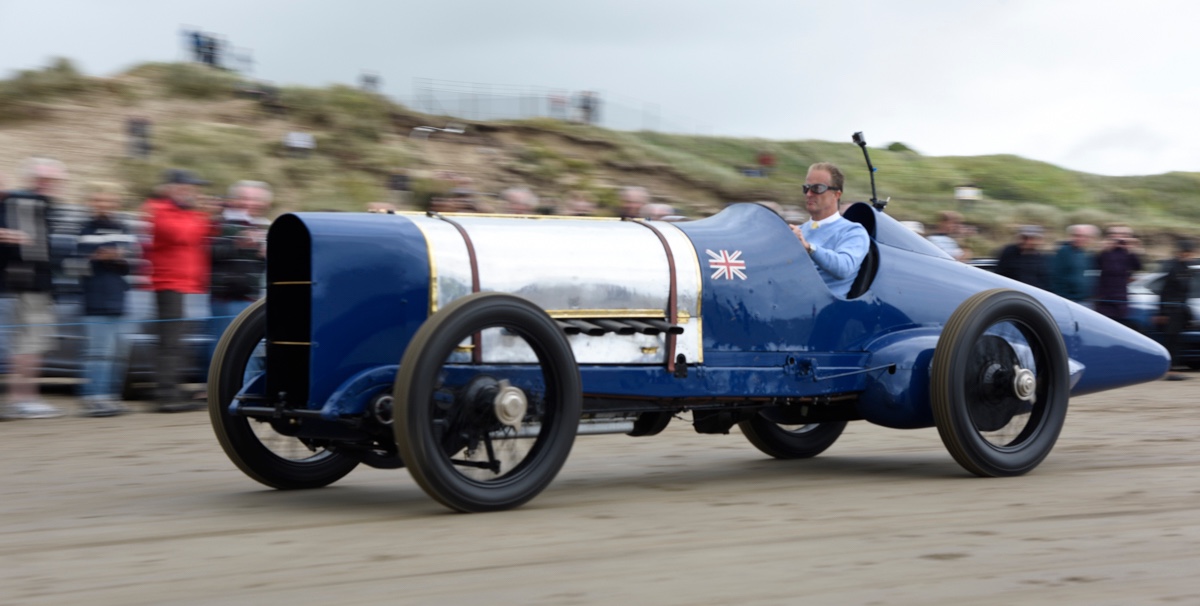 With Malcolm Campbell’s grandson, Don Wales, at the helm, the “Blue Bird” Sunbeam was back on the Britain’s Pendine Sands recently for a low-speed commemorative run to celebrate the 90th anniversary of Campbell’s land speed record run of 150 miles per hour.

“I was thrilled to be given this amazing opportunity to sit at the wheel of my grandfather’s car back at Pendine where he set his record,” Wales, himself a land speed-record holder, said in a news release. “It was an honor both to follow in his footsteps and to drive this iconic car on such a special occasion.

“My grandfather was a remarkable man and for us to remember him and honor some of his achievements in this way is very humbling. I really must thank Beaulieu for this opportunity and for all the hard work the restoration team have done on her.”

Beaulieu, of course, is Britain’s National Motor Museum at Beaulieu, which restored the historic vehicle.

Blue Bird was designed by Louis Coatalen, Sunbeam’s chief engineer and racing team manager and was built at the company’s Wolverhampton facilities in 1919 and early 1920. Power is provided by a modified 18.322-liter V12 Manitou Arab airplane engine like those used in British Navy seaplanes.

Campbell sold the car, which went through various owners and was in deteriorated condition when Lord Montagu purchased it in 1957 for his Beaulieu museum. The car was put back into working order and was shown in events in England, on the European Continent and in South Africa. Montagu and Donald Campbell drove it at what we known as the British Automobile Racing Club Festival of Motoring at Goodwood in 1962.

The car was retired until 1993 when, during a test fire-up to access the engine’s condition, a blocked oil passage led to the engine seizing. For several years, the car was displayed with a hole in its engine block.

The museum’s workshop team spend several years doing a restoration and in January, 2014, the car was fired up again and since then was shown at Retromobile in Paris and at the 2014 Goodwood Festival of Speed.

“When we were rebuilding the Sunbeam, I always hoped it would be finished by 2015 so we could run it here today on the 90th anniversary of its World Land Speed Record,” said Doug Hill, the museum’s manager and chief engineer. “I cannot think of a more fitting tribute to Louis Coatalen, the designers, the engineers who built it and the people who developed it during its racing history. I am also indebted to our team of engineers and volunteers who have spent more than 2,000 working hours returning it to running condition.”

Also participating in the commemorative run was the 1933 aero-engined Napier Railton Special that set a Brooklands lap-record of 143.44 mph.

The Napier-Railton also has Pendine history; It appeared with James Mason and Ava Gardner in the 1951 movie Pandora & The Flying Dutchman. In the film, the car attempts a speed record run that ends with it being driven into the sea to put out an engine fire. (Recently, a film researcher discovered that among the extras in the crowd scenes was Welsh poet Dylan Thomas.)

Pick of the Day: Ah, the elegance of the pre-war Packard