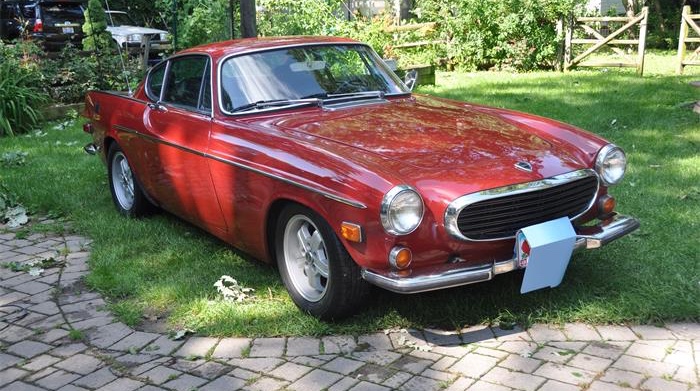 As the story goes, one of Volvo’s co-founders, Assar Gabrielsson, visited the United States in the early 1950s and was quite taken by the new Chevrolet Corvette. When he returned to Sweden, he had a fiberglass-bodied Volvo Sport created around components from the company’s PV444 sedan, though the car was discontinued after fewer than 70 were produced over two model years.

In 1956, Gunnar Engellau became Volvo’s chief executive and was convinced by designer Helmer Petterson to try again at producing a Volvo sports car. Engellau agreed to do so, but thought the car would be more successful were it designed in Italy. As it turned out Engellau didn’t know Petterson’s son was a young designer at Frua, which recently had been acquired by Ghia, and thus the Italian-designed car actually was the work of a Swedish-born stylist.

By the way, Pelle Petterson would become well known as the designer of sail boats, win two Olympic medals for sailing, skipper two of Sweden’s America’s Cup challengers, and his daughter, Cecilia, would launch the Pelle P. line of sportswear.

That car, the Volvo P1800S, ends up being the car of choice for Roger Moore when, long before he was Bond, James Bond, he played The Saint in a British television series that also was popular in the United States.

In a classified advertisement on the ClassicCars.com marketplace, the owner says the car is solid, reliable and 90 percent restored, “in very good to excellent condition” with “excellent mechanicals.”

Those mechanicals include a 2.0 liter four-cylinder B20E engine with Bosch fuel injection. The engine is linked to a four-speed manual gearbox with overdrive.

The owner reports a recent tuneup with new plugs and electronic ignition, installation of a new master brake cylinder and new rear brakes and rebuilt handbrake. The ad also says the transmission linkage is recently rebuilt and the car has a new clutch, pressure plate, release and pilot bearings, fuel pump and filter.

A set of Michelin Primacy MV4 radials on Volvo 240-series Virgo alloy wheels have been installed recently and the wheels aligned, the ad notes.

The owner says the body and interior (black leather) are “very good” condition, that the interior has new carpeting, and that recent work has been done on floor and rocker panels to “correct minor problems.”

PDFs of the shop manuals, service and parts documentation are included in the $17,500 or best offer asking price.

And in the spirit of full disclosure, the owner adds, “I was told I am the third owner,” but admits that may or may not be correct.

The owner adds that the rear window defroster needs new wiring and that the backup light needs a new switch.