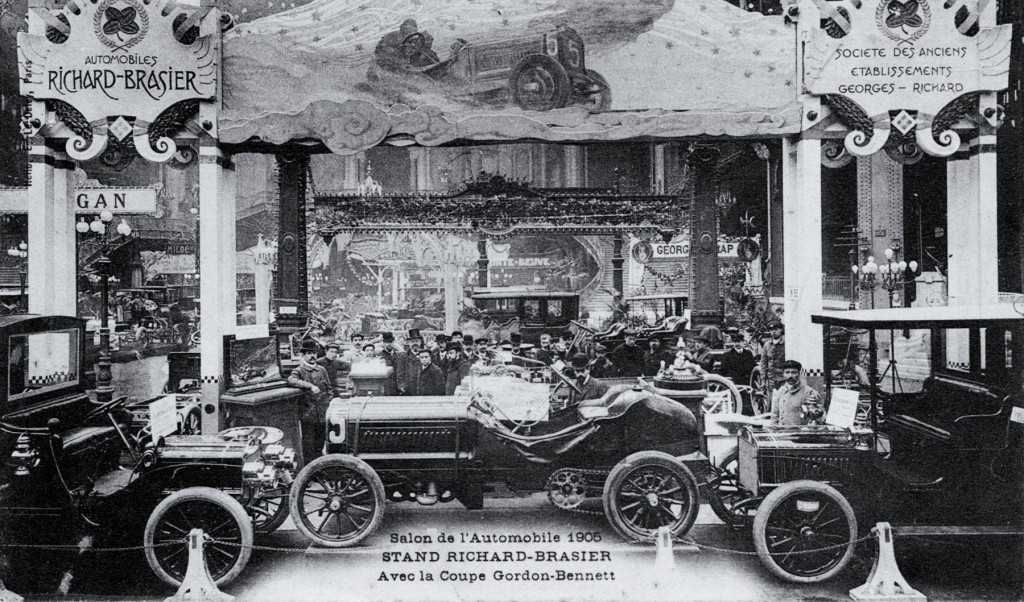 I came across this postcard in Monterey last year and couldn’t resist. As it states, the card illustrates the Richard-Basier stand at the Paris Salon in 1905. The star-car of the French show, the 1905 Gordon-Bennett winning racer is seen front and center.

The French firm of Richard-Brasier has a confusing history with many name changes, but the story starts with brothers Georges and Maxine Richards. They entered the bicycle business in 1893 and a few years later started manufacturing vehicles resembling the Benz Velo. In 1901, they enticed Henri Brasier, the chief designer for Mors, to join the team. His impact was immediate and by 1902, Brasier’s name was added to the marque.

The Gordon-Bennett Cup was the premier international race at the turn of the 20th century. Founded by the American owner of the New York Herald, James Gordon Bennett, Jr., the race was overseen by the Automobile Club de France (ACF) and open to the qualifying cars from each country. First raced in 1900, the race was won by a Panhard. Mors would take the fastest time in 1901 and this result would impact the Richard brother’s decision to approach Henri Brasier.

S.F. Edge of Napier would change the game in 1902, winning the race and taking the Cup from France. After Mercedes won in 1903, Richard-Brasier would bring the Cup home to France in 1904. The race held the greatest prestige and France took enormous pride in being on the cutting edge of the automobile industry.

Henri Brasier would make minor changes to the 1905 Richard-Brasier racer, lowering the center of gravity. The car had a 4-cylinder engine producing 90 horsepower at 1,200 rpm, three forward speeds and dual-chain drive. At 2,150 pounds and 104-inch wheelbase, the car was very much in keeping with the prevailing design of the day. Leon Thery, the winning driver from 1904, would return, and the car won the French elimination trials.

Richard-Brasier fielded two cars with strict instructions for the drivers to keep their speed under 50 mph. Adhering to the speed limit, they finished the race first and second. The racers certainly had the capability for higher speeds, but they wisely recognized the need to go the distance. The Fiat team led the first two laps by quite a margin, but would retire with mechanical problems, giving the win to Thery and the number 5 Richard-Brasier racer.

The 1905 Gordon-Bennett Cup was run on the Auvergne circuit covering four laps or roughly 340 miles. Richard-Brasier won in just over seven hours at an average speed of 48.5 miles per hour. This would turn out to be the last running of the Gordon-Bennett Cup as France and England choose not to resume the competition (forever keeping the cup in France). The competition would be replaced with the famed endurance race at Circuit de la Sarthe in Le Mans.

It was written that the Richard-Brasier company would send the car as well as Thery and Cailois to America to run the Vanderbilt Cup, but that does not appear to have happened.

In 1904/1905 the Richard brothers left the company to start the Unic that went on to achieve success building light cars and cabs. The company name changed to Brasier, but they would not repute their successes of 1905. In 1927 the name was changed yet again – to Chaigneau-Brasier – and in 1930 they ceased production, selling the factory to Delahaye.