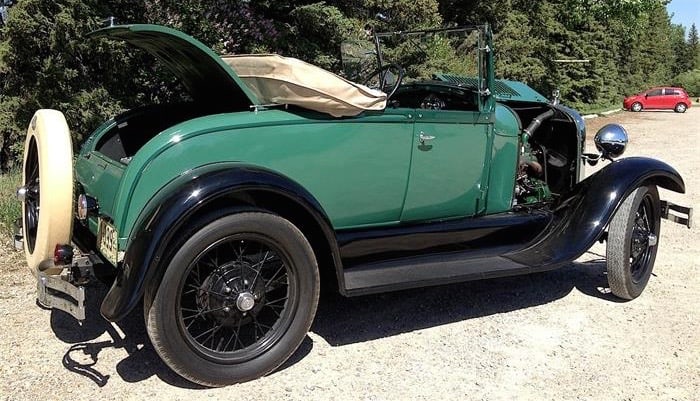 Since I was spending much of the summer in Michigan last year, Jonathan Klinger, vice president of public relations at Hagerty, invited me to meet up one Friday at the Gilmore Auto Museum to help teach a group of teenagers how to drive stick-shifted classic cars.

(Note: If you ever receive such an invitation, accept it; you cannot believe how rewarding it is to a: introduce young folks to old cars and b: to see the joy on their faces when they finally learn to manipulate three pedals with two feet.)

When the day was over, Klinger was heading on to northern Illinois to visit family. But he wasn’t eager to make that drive through Chicago traffic in his 1930 Ford Model A that he’d brought down from Traverse City, so he was going to rent a car.

Why, I asked, suggesting that instead of renting a ride for the weekend, he take my late-model Nissan Frontier pickup.

What are you going to drive? he asked.

Why, your Model A Tudor sedan, I responded.

So we swapped cars for the weekend. I not only had a great driving experience, but my grandchildren thought the car was a great fun as well — we took it to the Bath Bees’ softball tournament and to church and they insisted on riding back to the museum with me on Monday.

Which brings me to our Pick of the Day, a 1929 Ford Model A roadster currently located in Calgary, Alberta, Canada. The asking price is $24,500, though it appears the best offer close to that figure will be accepted.

Unlike Klinger’s ’30 sedan, this ’29 Model A is a roadster with neither a back seat nor a rumble seat (it has a standard-style trunk). But it does have a top that goes down for open-air motoring.

The private seller notes that this was a Canadian-built car purchased in 1973 from the original owner and now being sold by the family second-owner’s family.

“It is 100 percent rust-free and has never been in an accident (nor has needed any patch panels) in the last 86 years,” the advertisement on ClassicCars.com promises. “It has always been stored in a garage its entire life.”

The car reportedly was fully restored in 1973.

“The top, side curtains and interior are all from 1973 and are in excellent condition,” the ad assures. “The professional paintwork was also completed in 1973, and is still in very nice condition showing some patina.”

Not only does the ad promise that “everything on the car works beautifully,” but provides a link to a YouTube video that shows the engine running and the car being driven down a tree-lined highway.

The ad includes 25 photographs showing various parts of the car, inside and out and underneath and with the top up, down and with the side curtains in place.

“It is ready to be driven in any long-distance rally with complete confidence,” the seller adds.