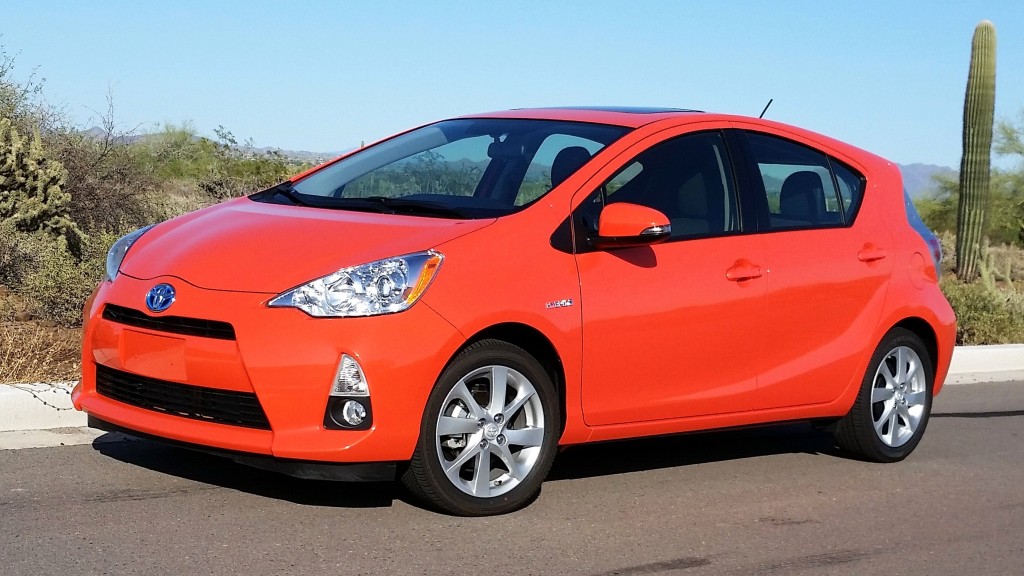 My favorite form of Toyota’s ubiquitous hybrid car, the Prius c is a subcompact hatchback that delivers sporty handling and a fun driving experience as well as a solid 50 miles per gallon.

For one thing, the styling is more expressive and appealing than the doorstop-shaped standard Prius. The car’s design goes a long way toward making the Prius c feel hipper and less generic. Going green doesn’t have to be humiliating.

The c’s drivability is not bad, especially around town, where this craft really belongs (after all, the c does stand for city), though it will scoot along at 75 mph highway speeds without complaint. The ride feels stable despite its small size. Handling is fairly crisp for this economy segment.

Acceleration with the gas/electric drivetrain is just fair unless you really stand on it, which naturally would adversely affect your fuel mileage. While driving the Prius c, you must keep in mind that sparkling pickup is not a major part of the equation; fuel mileage is.

The continuously variable transmission is kind of annoying, as they always are, but that is one of the key components of getting great fuel mileage; when the gas engine is running, the variable gearing keeps it at the optimal torque rpm for whatever driving condition. While it might feel droning and uninspired, it’s not terrible. At low speeds, the electric motor provides the main motivation, with the gas engine chiming in as velocity climbs.

The interior is much improved over the first-generation c, which was depressingly chintzy. Though still primarily the hard plastic of an economy car, there are enough textures and tones that it doesn’t feel like it’s from the bottom of the barrel. The seats are comfortable, though nothing special. The audio system was a disappointment, sounding cheap and tinny.

Essentially the size and shape of a VW Golf, the hatchback provides decent stowage with the rear seat folded. Shorter folks will find the back seat usable. The creamsicle-orange paint job on the test car was enjoyable and made it easy to locate in a parking lot.

Toyota has a number of other hybrid and plug-in hybrid vehicles in the showroom: the standard Prius and Prius Plug-In, bigger Prius V, Camry Hybrid, Avalon Hybrid, Highlander Hybrid and RAV4 Hybrid. The Prius c is the smallest and least expensive of the gas/electric collection.

At around $25,000 (including shipping) for the top-drawer Prius c Four (they go up sequentially in trim from One through Four) seems like an OK deal for a sophisticated little fuel saver that’s fun to drive. But if saving gas money is your primary or possibly only goal for buying a hybrid, the math doesn’t really add up. For instance, you could buy an essentially similar top model of the non-hybrid Toyota Yaris five-door hatchback for around $18,000 that gets a combined 33 mpg, according to the EPA.

But the Prius c is priced $7,000 more than the Yaris. So according to my calculator, it would take you nearly 19 years to break even. Not many people keep a car that long. And don’t forget that somewhere along the line, there would be an expensive hybrid battery replacement or two.

Even if you compared Prius c with any $20,000 non-hybrid car that gets 30 mpg, it doesn’t add up. Doing the same math, the 30 mpg car would cost $1,350 in gas, a $600 difference per year. At a $4,000 price differential, that would still take you nearly seven years before you see any financial gain for driving the teensy Prius c.

Then again, you could opt for the very basic Prius c One that goes for $19,540, plus shipping. And you could compare that to the very basic bottom-end Yaris at $15,570 (for a comparable five-door) and still have to count the years before you hit positive financial territory. Either way, you’d have to put up with the stingy accommodations.

But let’s not let logic totally take over. After all, car buying for most of us has very little to do with logic. So if you have goals other than just overall savings, such as environmental concerns or the daily pleasure of low-cost operation of the Prius c, you could justify the extra initial expense.

It’s also fun to watch that little on-board computer in the dashboard to see the continuous give and take of the gas engine and the electric motor, and see just how much mileage you actually can eke out of this little hybrid.