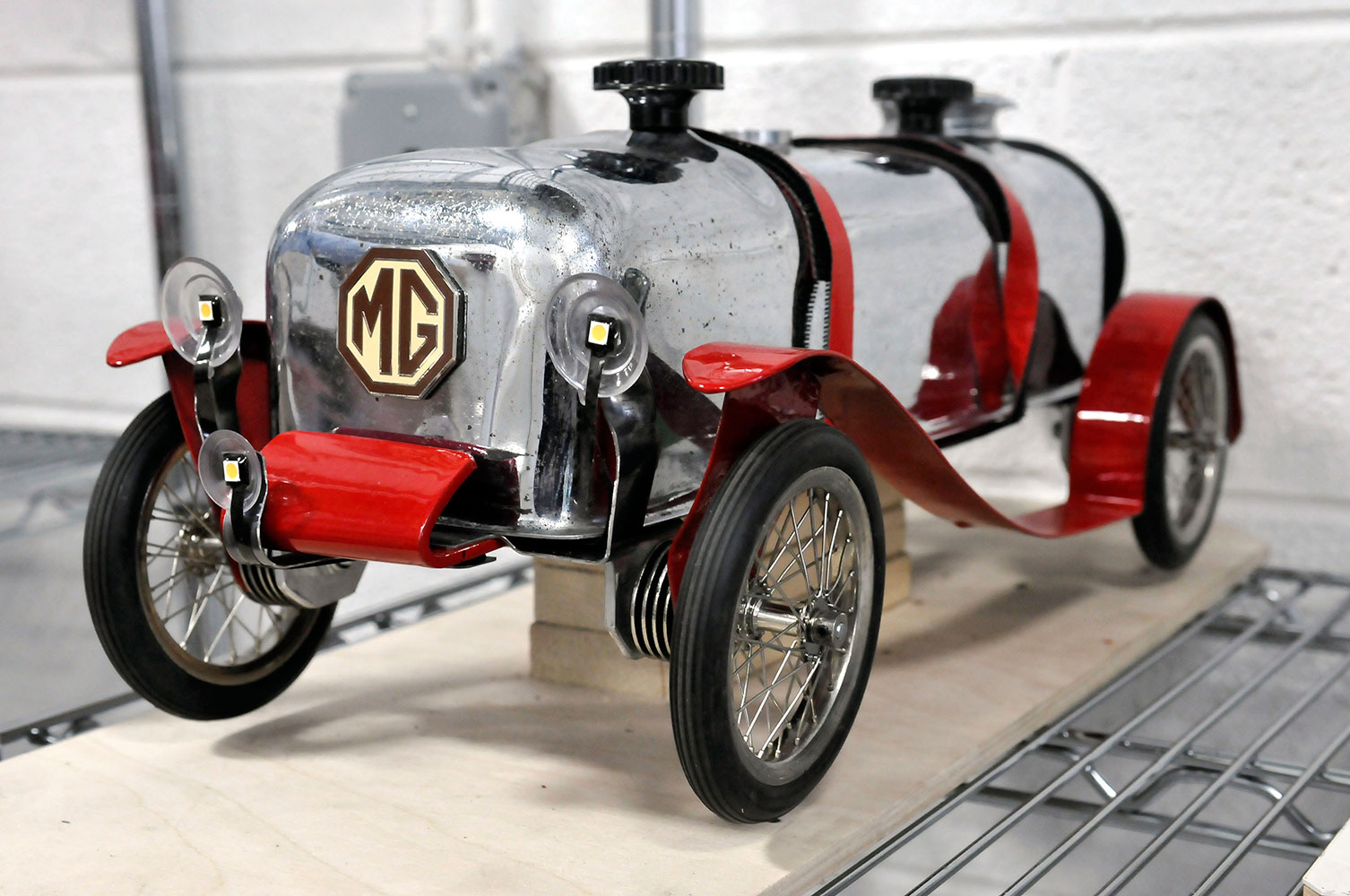 You can think of valve-cover racing as Pinewood Derby for the car guy. Here’s how it works:

You start with a valve cover from any automotive engine, add some sort of chassis and wheels and creative customization and then allow gravity to race it down a track.

“We know it’s been around for decades,” Hammer said, adding that, like so much of our automotive heritage, valve-colver racing started in Europe, where valve-cover racing was something else for car owners to do when they took their cars to shows.”

The expectation was that they would remove the valve cover from their show car,“ Hammer explained, “assemble wheels and parts, send the cover down a race track and then be expected to put the valve cover back on the show car and drive home.”

There isn’t a national or international set of official rules and regulations, although rules generally are similar with slight local variations. Hagerty set its rules to reflect those most commonly used in the U.S.

“Some groups have restrictions and can only use British valve covers or domestic valve covers,” Hammer said. “Generally, a lot of Ford or Chevy is used because they are easy to find and not super valuable.”

To participate in a Hagerty Valve Cover Race, the racer needs to be made from one automotive engine valve cover of no more than 30 inches in length, have four wheels which cannot extend beyond the front of the valve cover, use wheels no larger than six inches in diameter, and the racer can be no wider than 12 inches or weight more than 12 pounds. The racer must be propelled by gravity with no moving weights or motor.

“People are really getting into building creative racers,” Hammer said. “It’s something fun for car guys of all ages, the young and young at heart. We try to get everyone involved.”

At the 2015 Amelia Island Vance Cover Race, held during the weekend of the Concours d’Elegance, Hagerty invited several McPherson College students to participate as well as local Boy Scouts and Girl Scouts, and encouraged mentor partnerships for adults to help youngsters build their racers.

The racers come in all different shapes and sizes, according to Hammer.

“Some people go to the far extent. One guy in the local club built his racer as a replica of his car with full fenders and working headlights. Another family owns a Buffalo farm and created their racer to resemble a buffalo.

“Some look like a jalopy of sorts, rusty and almost falling apart. You can go to the far extent or keep it simple. Valve-cover racing is all about the fun light heartedness of it.”

At the Amelia Island event, Hagerty also provided racers that anyone could use. This sparked a lot of rivalry between people choosing either Ford- or Chevy-based valve-cover racers.

Hagerty has been hosting valve cover races since 2013 and revamped its track last year.

Hagerty’s new track is 18 feet long and incorporates a drag-racing Christmas-tree start light system to incorporate reaction time into a race that can be over in just a couple of seconds.

“This year we will be at five or six different locations,” Hammer said. The races take place at car shows, museums or other car-centric places.

In addition to the speed awards, many events offer awards for the most innovative racer or for the best paint job.