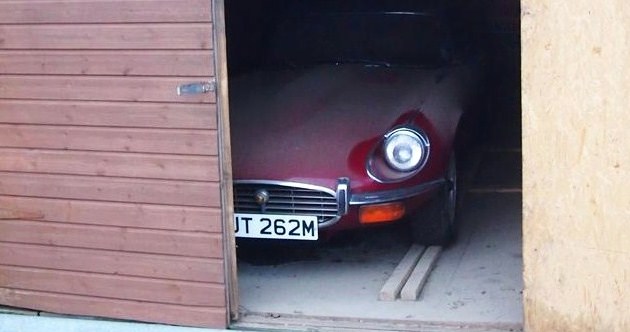 Yet another amazing British “barn find” comes to auction next month, a single-family-owned 1973 Jaguar E-type roadster that has been stashed away for more than a quarter century and has just over 7,700 miles on its odometer.

The Series II E-Type with V12 engine and manual transmission will be offered in all its dusty glory at Silverstone Auctions’ May 23 sale at the Silverstone Circuit race track. Silverstone estimates the car’s value between £75,000 and £90,000 ($112,000 and $134,000 at today’s exchange rate).

The car was purchased in April 1973 by the current owner’s grandfather, who used it sparingly and kept it in the garage at his Warwickshire home. In 1993, the car passed to his son, who kept it in the garage, although properly “immobilized,” the auction house says in its description, with oil added to the engine cylinders.

The car was fully serviced in 2006, and the current owner inherited the car when his father died in September 2014. The car was recommissioned to be road worthy earlier this year by a Jaguar specialist in preparation for its auction debut.

“The car today is therefore presented in very highly original order throughout having covered just 7,740 indicated miles from new,” Silverstone says in its catalog description. “All the interior is completely original and nicely patinated, the hood (convertible top) is original and in reasonably good working order, even the spare wheel and tool kit are believed totally original.

“The paint has reacted over time to the moisture in places but seems to be original to the car. The original chrome has rotted in a few places, such as the rear bumper, and the exhaust is now finally blowing. However, it is a very original, rare and very special car which now offers a unique opportunity to own one of the lowest mileage V12 E-Types in the world with known single family ownership from new.

“It starts well, idles happily and the manual gearbox feels positive and accurate.”