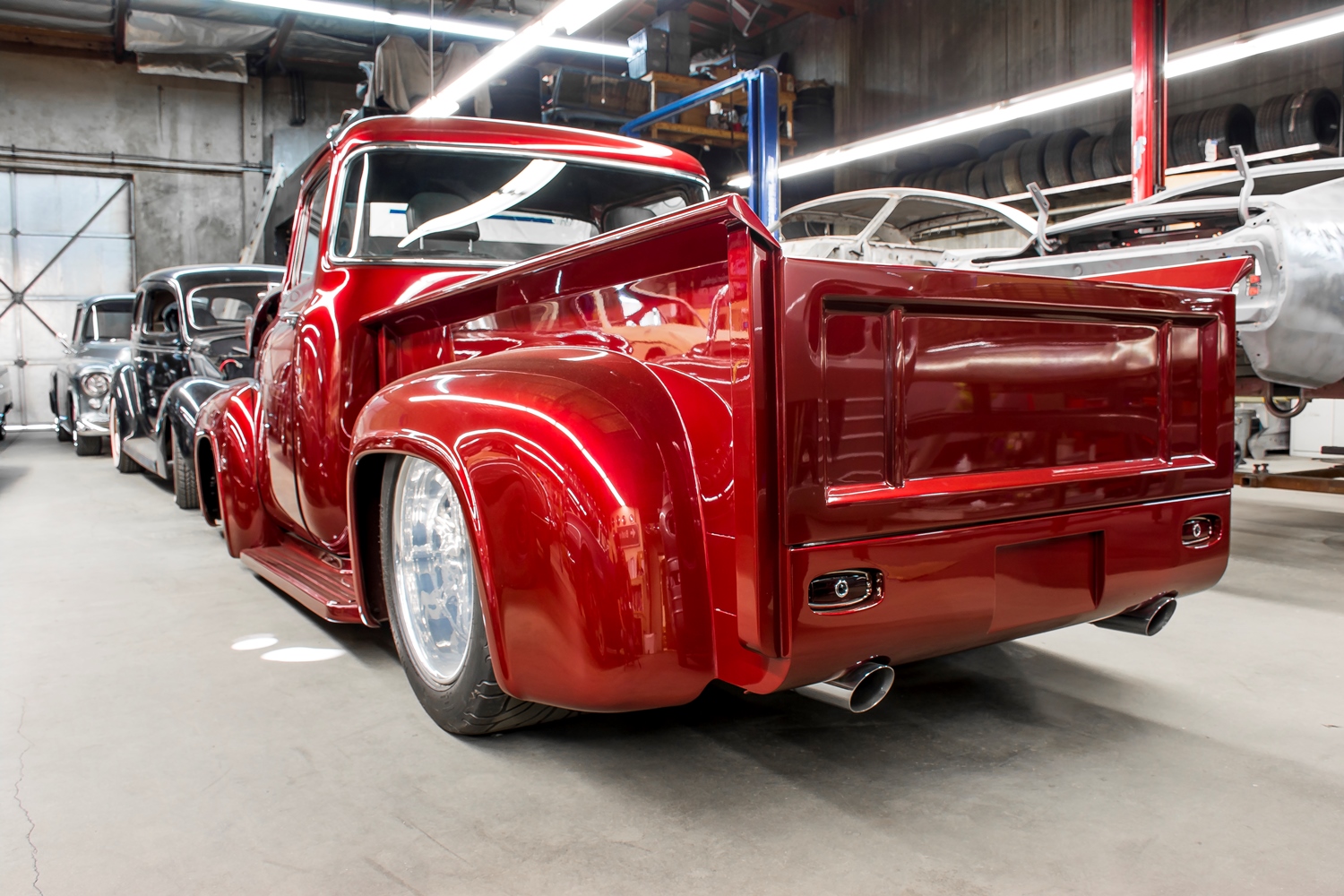 When Bodie Stroud was in high school, he saw a beautiful Toyota truck slammed to the ground. “It was so cool,” Stroud remembers, recalling that it had belonged to the “coolest guy in school.”

But when the truck was battered and bruised in a crash, Stroud bought it from Mr. Cool and put it back together.

“It was my first experience working with a smashed car and fixing it to see how everything worked and fit together,” Stroud said. “That was the beginning.”

For Stroud, that Toyota rebuild was the start of a career during which he has become known for high-quality fabrication that maintains the integrity of the original design. He has done work from everyone from Joe Average to A-list celebrities.

His builds have the look, feel and attitude of the original models, but perform like today’s modern machines.

Stroud’s goal with each of his builds is to have them drivable.

“I build them so they can handle all the elements of the road,” he said. “I build mine so you want to and can get in and drive. It’s not a show queen. My goal is for my builds to be beautiful but drivable.”

“When I go to car shows, my cars are always different from what other people do,” he added. “Most cars at the shows are typically flashy, covered in chrome, and never see the street.”

“When these cars first came out they were never perfect, and if you make them too perfect they can get over the top and it doesn’t feel like that car anymore. I like the old-car smell, doing burnouts and maintaining that old feel.”

Another of Stroud’s goals is to make building cars easier and less expensive.
“The problem with the hobby is that to build these cars it’s very expensive,” he said. “The younger generation doesn’t have the pockets that the baby boomers have. I want to make it easier for them, supply part numbers, be able to order stuff, like a kit-car kind of style, so it can be bolted together and drive.”

Stroud has developed his own line of suspension and chassis components for popular and affordable classics. Eventually he plans to add complete chassis, braking system, fuel system, exhaust system and almost every major mechanical part of the car so it’s easier for the enthusiast to build in the garage.

“People will be able to buy everything for their build and it will all essentially bolt together,” Stroud said, adding that there will be step-by-step instructions designed so someone has the option of doing a build as a long-term process or all at once.

“When people come to me, it’s expensive,” Stroud said. “One of my cheapest builds was two-hundred-thousand dollars. That’s like buying a house.”

“The cost of the materials is expensive and there is nothing I can do about it. The paint and upholstery can be one-hundred thousand dollars alone. And that’s not even with labor or fabrication work. From there it depends on how crazy the customer wants to get or how much body work needs to be done. It adds up really quickly.”

While he’s trying to simplify things for the hobbyist, what Stroud loves are the builds that challenge him.

“I love when people come to me with challenges,” he said, “someone who just wants to get completely crazy. They don’t care what they spend and let me run wild with my imagination and change the lines.”

Stroud’s favorite build so far was a 1960 Ford Starliner nicknamed the “Scarliner.” A friend of Stroud’s had owned a Starliner but sold the car to start a business. Once the business took off, Stroud helped his friend find and build the ultimate Starliner.

Others suggested a classic Starliner could not handle the power of a 2006 Ford GT engine. Stroud made it work, and took home the Ford Design award at the 2009 SEMA (Speciality Equipment Market Association) Show.

“It was an insane build,” Stroud said. “I built it when I was new to the industry, new to business, and it was before modular motors.”

Stroud said the most challenging part of the build was to put the engine that had been mounted midship in the Ford GT and place it at the front of Starliner.

“We had to do a lot of fabrication work, re-design the chassis, and tap into the computer to make everything work.  It was challenging, but we got it all done in seven months.”

Stroud said that at the SEMA Show, people would walk up to the car and say,  “oh, check out that mod motor,” only to realize that “It’s a real GT motor!”

“It’s cool when someone can look and appreciate all the changes I’ve made,” Stroud said. “(Comedian) Tim Allen’s Camaro was the same way. Some people walk by, but then they notice the changes.” Stroud did extreme fender flairs on Allen’s Chevrolet, but says they were done so well that when the car was finished the look was not at all extreme.

While he used the full Ford GT engine for the Scarliner, Stroud likes the availability of modular engines. He also sees their popularity encouraging the movement of young car owners into the classic car market.

And, he adds, when you build something “cool,” there will always be interest and value.

“I try to drive around with the cars, and pick my kids up from school in them. All you have to do is ignite that one kid with passion who’s blown away and will hold onto the memory of seeing ‘that really cool car’ forever.”

“Johnny Depp was the most challenging celebrity to work with because you had to go through 20 people to talk to him and then he’d disappear and then you had to get back in line for the next question.”

Stroud’s shop, BS Industries, located in Sun Valley, California, has 20 employees and typically between 20-25 customer cars in various stages. Among his current projects is a 1963 1/2 Ford Galaxie.

“The car is a real R code 427,” Stroud said. “We have done some crazy changes to it, but the changes appear subtle. I want to make it look like it just came off the show room floor by today’s standards, but better, like you would imagine a high-end sports car.”

Today, at age 45, Stroud considers himself more of an artist than a car builder or mechanic.

“I’ve always been very good at drawing, and then realized how good of a mechanic I was so I stepped away from art for a bit but now I consider myself an artist and a business owner.” Stroud sketches out his build ideas and considers his builds his artwork.

And he’s also becoming a media personality. Stroud hosts a radio show, In the Garage, every Wednesday morning on crntalk.com.