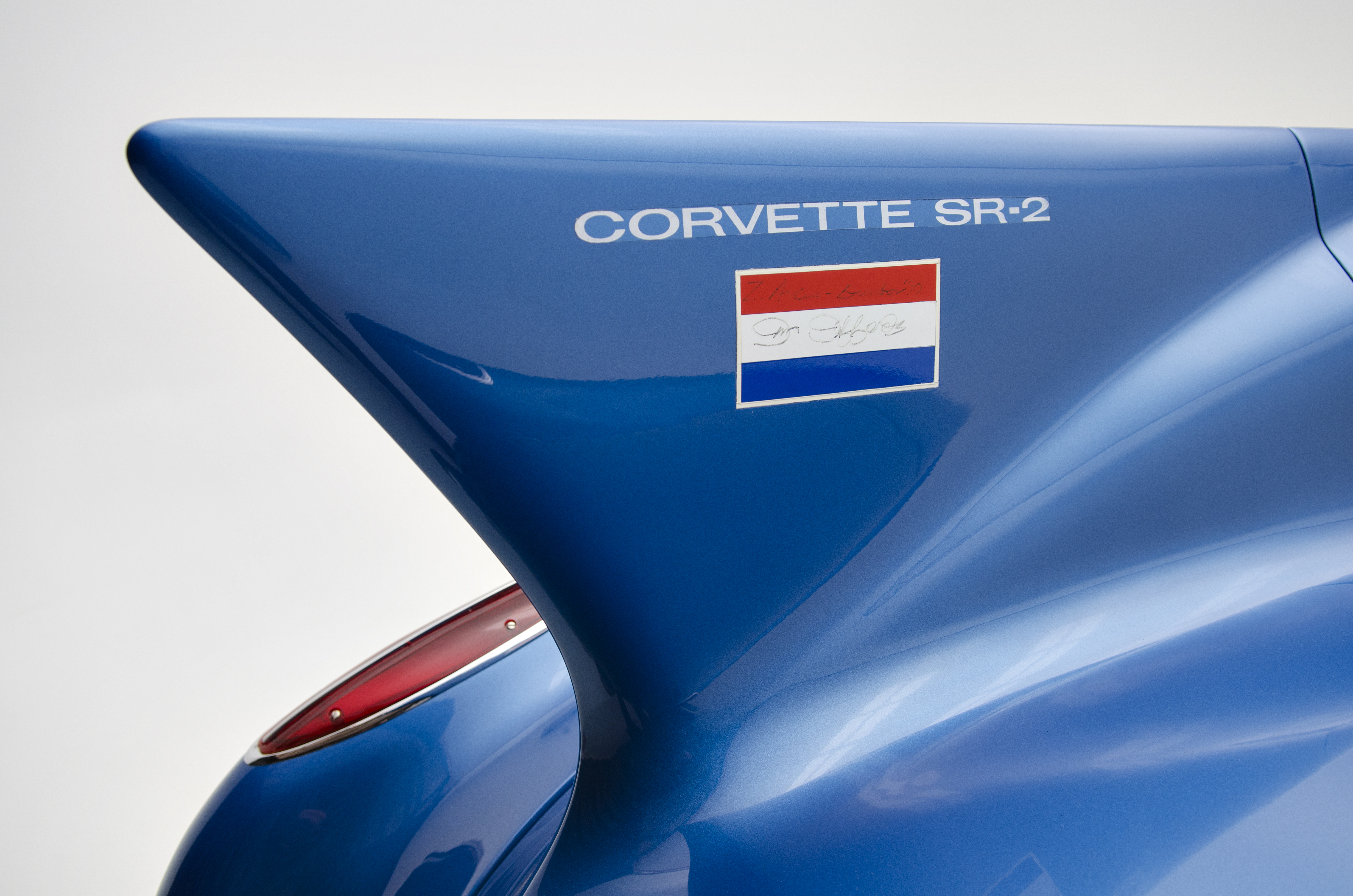 ‘If the 1960s was the Golden Age of motorsport, the 1950s was the Turning Point.” Or so I wrote in an article nearly a quarter-century ago in Vette Magazine. I was referring to the Corvette SR-2 factory-built racer of 1956. It was the first racing Corvette of its kind, making it the original vine from which a rich and flavorful vineyard grew.

I was reacquainted with the SR-2 recently when I sat down with “Corvette” Mike Vietro, a broker and sales specialist in the Corvette hobby. The SR-2’s current owner has tasked Vietro to sell the vintage racer and the number is big: $6.885 million.

But is it really a big number? Consider that this is the first – the very first – purpose-built Corvette race car. It was conceived and built by an in-house team including GM design chief Harley Earl and Corvette engineering legend Zora Duntov. And it was the result of a veiled threat.

Jerome Earl, Harley’s son, competed in SCCA road racing. But in a Ferrari.

Chevrolet division chief Ed Cole called Harley Earl into his office one Monday. The conversation, well, more of a command, supposedly went something like this:

“I saw your son racing over the weekend. Why is he in a Ferrari? He should be racing a Corvette. Fix it.”

And thus began the first purpose-built racing Corvette project done internally, all for the design boss’ son. Three SR-2s were built. One was a show car that kept the initial iteration of a low, central trunk-mounted fin. The other mimicked this high-finned Jerome Earl car, though painted red with white accents.

Over a short period beginning in May, 1956, Chevy developed the blue SR-2, and it evolved quickly, as all race cars do. A variety of brake components were tested, including discs, but Cerametalix drum brakes were fitted before any racetrack combat. The low, centrally located tail fin was quickly scrapped in favor of an offset fin behind the driver, clearly inspired by the Jaguar D-type.

Up front, the SR-2 originally had an early 265 cubic-inch small-block V8, drastically overfed by a pair of four-barrel carburetors. Duntov and his merry men found that combination never worked as well as hoped; the displacement and camshaft timing were mismatched to the fuel system. Having introduced the new small-block Chevy V8 just one year prior, Duntov spent as much time in dyno cells working on getting new engine combinations right as he did sleeping.

Cole was an engineer by training and wanted fuel injection on production cars, especially the Corvette. GM had lab-tested a variety of injection systems dating to the very early ’50s, but the impressive Mercedes-Benz 300SL setup lit a fire under the developmental arse. GM engineers worked around the clock on the injection system now that they had a real racing schedule to meet.

The SR-2 was a perfect opportunity to sneak some future-tech past an audience who was well read on hot rodding, engineering and racing. Duntov and his supporting engineer, John Dolza, finally worked out the fuel injection’s metering problems. The SR-2 got the earliest Rochester fuel injection unit seen in public.

Dyno tests showed 310 horsepower from the 283-cid V8 with standard exhaust manifolds. The SR-2 hit 152.866 mph in the flying mile on the sand at Daytona Beach in February 1957, bested only by a Jaguar D-type, a car that clearly inspired the SR-2’s revised fin.

The core Corvette team also figured out other meaningful bits on the SR-2 that later went into limited production for privateer racers. Chief among them was RPO (Regular Production Option) 684, a suspension package which included higher spring rates (from 300 lbs./in. to 340 in front; and from 329 lbs./in. to 357 in the rear), larger anti-roll bars, stiffer shocks and a much quicker-ratio steering box. In addition, a little thing called Positraction debuted with RPO 684. It was first tested and validated on this very SR-2, to the never-ending thanks, admiration, 60-foot times and corner exit speeds of generations of racers that followed, both at the drag strip and on road courses.

After a short season in 1957 when Paul O’Shea and Pete Lovely took 16th overall at Sebring and Jerome Earl entered Nassau Speed Week in the Bahamas, Jim Jeffords purchased the SR-2. Jeffords modified and repainted it, christening it “Purple People Eater,” one of several such named racers he fielded over the years. Jeffords won the SCCA’s B-Production championship in 1958.

A year later, the old SR-2/Purple People Eater landed at Indianapolis’ Bud Gates Chevrolet – a station stop for many interesting cars over the years – for sale at $3,600.

Despite changing hands five times, the car has always retained a comprehensive binder full of pertinent documents illustrating its interesting and important provenance, complete with photos of as many as 17 GM styling studio staff and engineers cramming to get bodywork done in May, 1956.

In 1986, Rich Mason purchased the car and carefully brought the SR-2 back to its 1957 glory. And glorify it he did, vintage racing the car extensively over the following two decades and entering it in many top shows, where it won a truckload of awards.

With the luxury of 20/20 hindsight, we can see the SR-2 is truly one of one. And if rare (and real) L88 Corvettes fetch well into the millions of dollars at auction, the first of the breed should command more. For if there were no SR-2, there would never have been some other magic numbers that give enthusiasts goosebumps. Numbers like Z06, Z07, L88, Z51, ZL-1 and ZR-1.

But still, the really big number of today seems very specific. I asked Vietro how he came up with the $6.885 million figure.

“It’s one of one, even though two other SR-2s were built,” said Vietro. “This is the one all the development work took place on. It’s the one that was raced, and by serious racers. And you couldn’t dream of better documentation.”

Also, consider that the last offer – refused – for one of the five Corvette Grand Sports racers was more than $12 million. From a factory involvement standpoint, the SR-2 is the next-most significant racer behind the Grand Sports. Vietro therefore thinks the SR-2 ought to be worth at least half. There’s also psychology in not having a neat, tidy number.

Magic numbers. And $6.885 million might be another magic one.
http://corvettemike.com/SR-2

Jim Resnick
Jim Resnick began his career as a writer, reporter and photographer for magazines including Vette, Hot Rod, Chevy High Performance and Car Craft. In 1996, he launched Bimmer Magazine as its editor-in-chief. He also was technical editor of Sports Car International. Later, he did public relations and marketing for Mercedes-Benz, Ferrari and Jaguar Land Rover, and thus brings a unique perspective to his reporting and writing. He also is a "recovering" racer and guitarist.