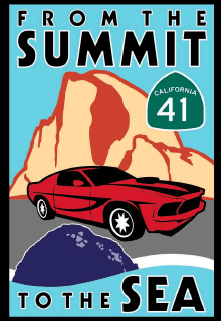 A car-guy friend just got back from running a marathon. Amazingly, even some car people think running 26 miles, 385 yards instead of driving that distance makes sense. But at least the marathon he chose to run was in St. George, Utah, where the course is pretty much downhill from the starting line to the finish.

That’s also the case with a classic car event later this month. “From the Summit to the Sea” will take a caravan of classic cars some 200 miles along California Highway 41 from Yosemite National Park to Morro Bay. The event is being staged to celebrate the 150th anniversary of Yosemite and of all California State Parks (Yosemite was a state park before it became a national park).

While the celebration runs from October 22-24, the drive takes place on the 23rd, with some 150 classic cars leaving in the morning from Oakhurst.

“Just out of Oakhurst you’ll drive through the Sierra National Forest, see the Merced River run through the historic town of Wawona, witness the amazing cliffs and vistas along the road to Yosemite Valley and enter into the iconic world of Yosemite when you come out of the tunnel and see Tunnel View — one of the most photographed vistas in the world,” Yosemite Sierra Visitors Bureau chief executive Rhonda Salisbury told the rockofthecoast.com website.

From Yosemite, the route turns back to the south, ending at Morro Bay, a former ocean-side fishing village which is celebrating its 50th anniversary as an official city.

You could call the drive a “Summit to Summit” rally because it ends at the 565-foot Mooro Rock on the Pacific Ocean at sunset.