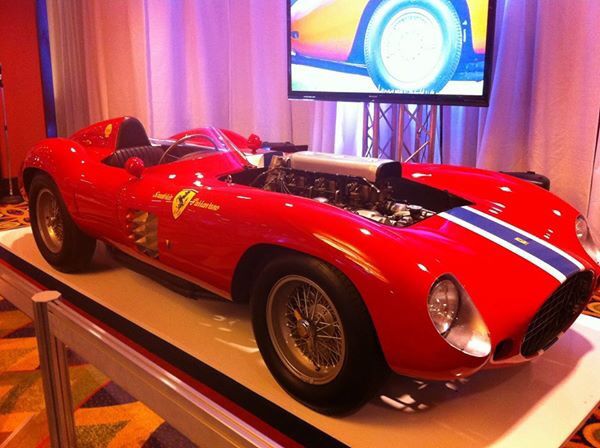 Not only did Rick Cole introduce new bidding technology to the classic car auction world with his bid-by-smart-phone sale on the Monterey Peninsula, he’s also changing the way results are reported.

Here it is, more than a week after bidding ended and we still are unable to report final numbers from the sale.

According to Cole’s website, 24 of the three dozen cars available have sold, and for more than $23.2 million, led by a 1965 Ferrari 275 GTB Competizione Clienti that sold for $12 million. Those numbers boost the overall Monterey auction totals to more than $427 million.

However, and this is a big however, Cole is telling his public relations person that he’s confident all four cars listed as “sales pending” soon will become sales completed. The closure of those four sales would add $34.5 million to the auction’s sales total.

Apparently, we’ll have to watch Cole’s website to learn when those sales close because he told his publicist that the negotiations between the car owners, the high bidders and Cole’s staff will not play out in public.

It is typical in the classic car auction world for cars which don’t meet the owner’s reserve price during live bidding to move from the block to “still for sale” status. Such after-the-bidding sales can be very important to an auction house’s bottom line.

For example, among the other auction companies with sales this year on the Monterey Peninsula, at least two enjoyed significant post-block sales: The preliminary figure of $106.5 million at Bonhams turned into $108 million in the final accounting while Russo and Steele’s auction total grew from $9.6 million to more than $12 million.

Cole was the first to conduct a classic and collector car auction on the Monterey Peninsula. That was back in 1986 (he sold rights to that original sale to RM in 1997). Cole returned this year, but with the new auction format. Only some three dozen cars were included in Cole’s new sales format, and bidding on them didn’t take place across a traditional auction block but via smart-phone technology.

A somewhat similar format has been used with success recently for some contemporary art auctions. With the very busy schedule of events — including five live auctions — during Monterey Classic Car Week, Cole thought bidders might like the opportunity not only to see the cars at their leisure — the cars were on display during the week at the Marriott hotel — but also to bid the same way, without having to be present in the room, or even live via phone or internet.

Under the format, bidding was to extend until midnight on the Sunday of the Pebble Beach Concours d’Elegance. Soon thereafter, Cole’s website indicated that 18 cars had sold, and for more than $20 million, led by the ’65 Ferrari 275 GTB Competizione Cienti and with four other Ferraris going to new owners in transactions priced between $1.05 and $2.2 million each.

Through his publicist, Cole said there is a positive public perception. According to an email to ClassicCars.com, “The system was easy to use, fun to use, no hassles, no time limits, time to think and mull things over. We didn’t charge hundreds of dollars to bid, and the room was a great place to network as anybody who was anyone was there including many great international collectors.”

The email reports “that the biggest compliment to all of this is the affirmation that there is a future for this type of auction, as evidenced by rumors that other major auction companies are already planning similar events.”

Even with four sales pending, Cole’s sales-so-far total of more than $23 million, plus the updated figures from Bonhams and the Russo and Steele sales, pushes the Monterey auctions total sales to more than $427.5 million, easily a record for the week and nearly $100 million more than the $352 million figure compiled in 2013. Completion of those four pending sales by Rick Cole Auctions, even for the current bid amounts, would boost that figure to a stunning $461.5 million.

Of course, those pending sales are, well, pending, so we present the following reports of the top-10 sales (so far) at Rick Cole’s Monterey auction and also the top-10 for all of the Monterey auctions. (All figures include buyer’s fees.)