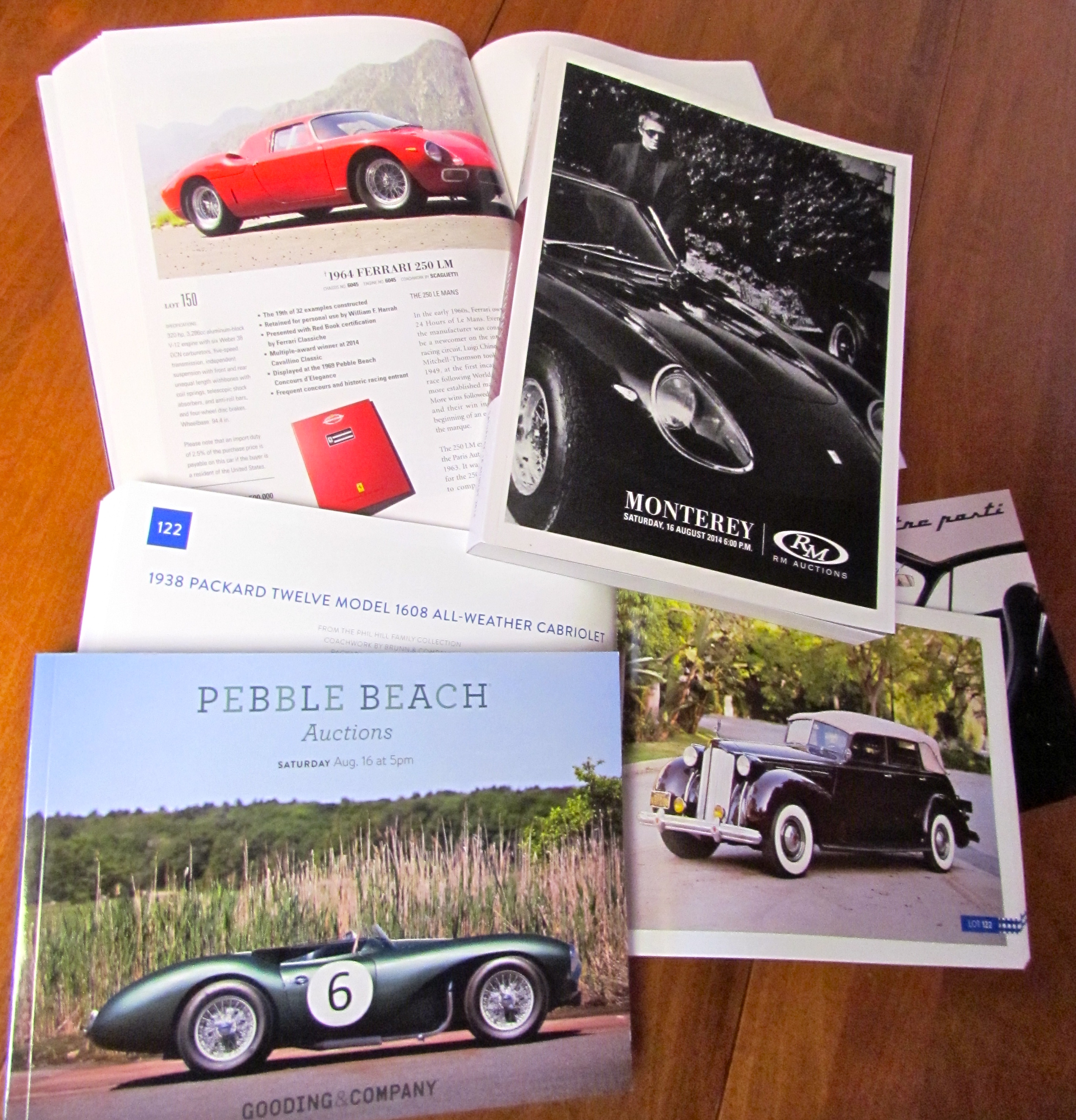 Some people have to wait until sometime around Thanksgiving for their “wish books” to arrive. At least that’s what we used to call them, those holiday shopping catalogs we’d thumb through so eagerly, thinking how wonderful it would be to possess such products.

But classic car enthusiasts don’t have to be nearly so patient. We get our drool-inducing, I want that under my tree, oh, wait, I want that one, too, catalogs of delights in late July, because that’s when Gooding & Company and RM Auctions deliver their Monterey auction inventories for our perusal.

Yes, I know, Bonhams also produces a catalog for its sale at The Quail, but the British auction house has a policy of sharing its auction books only to actual bidders, not with members of the media.

Sure, I can go online to see what’s included — among them all those glorious Ferraris coming out of that museum in Italy. I can do the same for the Mecum and Russo & Steele auctions that will take place on the Monterey Peninsula. But reading on a screen doesn’t provide the same experience as holding a big, beautifully printed catalog in my hands. There’s a tactile quality about print that still appeals to many of us, even to those of us who increasingly make our living writing for the web, not for print.

Part of it, I think, is knowing that we need to cherish this experience while we can. Print is expensive and, it seems (and I lament), is becoming less necessary in a world that is increasingly digital, and especially mobile digital.

In the case of wish books, whether they come in late July or November, part of the thrill might simply be the waiting, the anticipation of the box arriving and knowing it has the catalogs inside.

RM and Gooding ship their Monterey catalogs in cardboard mailing boxes because each produces a pair of books, one for each day of their sales. Each of those volumes weighs around 2 1/2 pounds, at least that’s what my old fishing scale said when I weighed them yesterday.

RM’s catalogs are printed in an 8 1/2 X 10 3/4 format and total nearly 700 pages. Gooding’s catalogs also are on heavy stock, though trimmed to 7 1/8 x 9 1/8 format. They are just as thick, actually. Stack them next to each other and the Gooding group is a little thicker, in part because there’s a third volume, 36 pages just on the tre posti, the 1966 Ferrari 365 P Berlinetta Speciale, a car that potentially could draw the highest bids in classic car auction history.

I’m not going to Monterey this year. My colleague Bob Golfen drew that assignment. But that doesn’t mean I didn’t thoroughly enjoy sitting down, putting my feet up and going through the catalogs page by page, and then page by page again. And I’ll go back through them at least a couple more times between now and the drop of the first hammer.

A few notes from my initial perusals:

We all know that Monterey week provides a playground for the wealthiest of classic car collectors. If you had any doubts, consider that in just these two auction house’s catalogs, I counted only a few more than a dozen cars with pre-auction estimated prices of less than $100,000, but more than 200 with estimated values of at least six figures, including 70 or so with low estimates of at least a million dollars.

And at least four cars are expected to draw bids involving not seven but eight figures.

We all have our personal tastes, but were I among those with millions to spend at Monterey, here are some cars that I would consider after my first journey through the catalogs:

While those are some highlights, there were others, many others, that caused me to stop, look, linger and read.