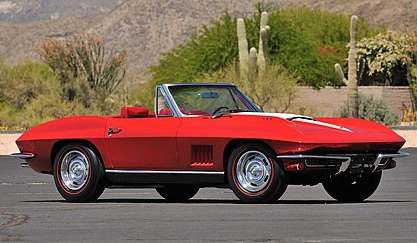 Houston being the site of the NASA Johnson Space Center, it seems only fitting that among the 1,000 cars being offered up for bids this weekend at Mecum Auctions’ sale are two formerly owned by astronauts. And not just any astronauts, but the first two U.S. fliers to travel into space.

In addition to riding rockets, astronauts were known for their rocketing along the highways in Chevrolet Corvettes. Alan Shepard, the first American into space and later known for hitting a golf ball on a course called “The Moon,” was among those Corvette owners, but later in life he owned by 1995 Camaro Z28 convertible, a car that will be lot F59 at the Mecum sale.

Virgil “Gus” Grissom died in the Apollo 1 catastrophe just a few months after he’d purchased a 1967 Corvette convertible. The car continued to be shown in parades at Cape Kennedy in Florida, has been restored and has won NCRS Top Flight honors. It will be Lot S120.1 at the Mecum sale.

Among other vehicles at the sale at the Reliant Center are:

In addition to the classic car auction that runs April 10-12, Mecum will stage a one-day MidAmerica vintage and antique motorcycle auction April 13, with 200 bikes available.

Among them are nearly 100 bikes from the collection of Mike Doyle, including:

Also crossing the block will be two motorcycles formerly owned by Steve McQueen:

The Houston classic car sale will be televised by the NBC Sports and Esquire networks.