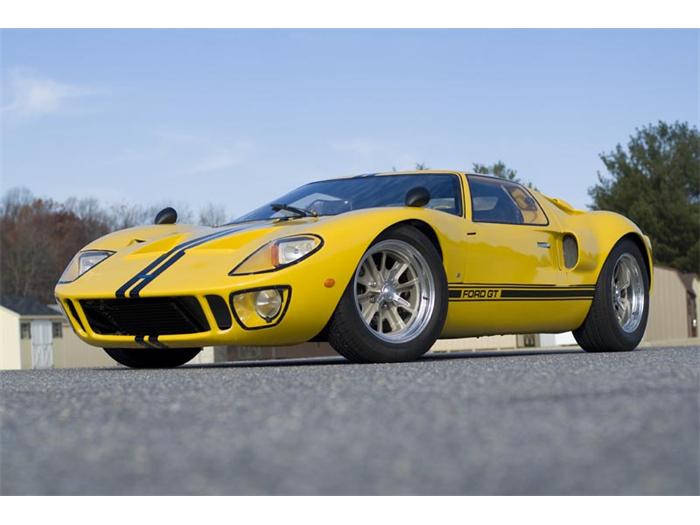 The original Ford GT40 of the 1960’s was conceived, designed and built for the sole purpose of showing the Europeans that Americans could win the endurance race of races…the grueling 24 Hours of Le Mans. Up to this point, the Europeans (and especially, the big, red Italian stallions) had dominated the biggest races of the day.

Henry Ford II (then Chairman and CEO of Ford Motor Company) assembled a team of designers, engineers and builders to produce a world-class, high-performance GT (for Grand-Touring or “Tourismo”). This GT sports car would prove that we “Americans” and specifically the Ford Motor Company, could build a race car to compete with the best cars and teams the world had to offer. And boy oh boy, did he ever succeed by winning not only first place in the 24 Hours of Le Mans in 1966, but also the other two remaining GT40’s took second and third places. This started a legacy of wins at the prestigious 24 Hours of Le Mans which lasted all the way through 1969.

Fast forward to the year 2003, the year of Ford Motor Company’s 100th Anniversary. It brought the introduction of a new, updated version of the awesome, world-class and legendary Ford GT40 in a production supercar, simply named the Ford GT. Some thought (at least internally at Ford Motor Company) it would be called the Ford GT43 because the height of the new car was 43 inches.  Even though the cars looked very similar to the naked eye, they were extremely different under the beautifully curvaceous body skin.

Ford’s Vice President of Global Design and Chief Creative Officer, “J” Mays, headed up a team of designers, builders and engineers. This team included Camilo Pardo (head of Ford Motor Company’s “Living Legends” studio and responsible for the hands-on design of the new Ford GT), John Coletti (Ford’s leading engineer on the GT program) and of course, the famed Carroll Shelby (tapped to lend his legendary expertise to the design and performance testing of the new asphalt-punishing beast).

The result was an amazing combination of legendary, historical performance with the efficiency of modern technology, including futuristic design techniques. These combined some of the lightest, space-age materials available and the latest in high-performance components on the planet. All of this produced a modern day, supercar with real-life “I can own and drive this thing to the beach, the supermarket or the local raceway” sex appeal.

The new Ford GT was built for only two years, 2005 and 2006, as a special interest vehicle and Ford Motor Company only planned to produce a total of 4,500 copies of this modern legend. Actually, only 4,038 units were produced and about 300 of those were destined for distribution in Europe and Canada.

The Ford GT, like its predecessor, is a mid-engine, rear-wheel drive, two door, two seat, superfast sports car. The Ford GT carries a modular 5.4 Litre supercharged V8, which is bolted to a specially designed, six-speed manual transmission. It can go from 0 to 60 mph in 3.2 seconds and run through the traps in a quarter-mile jaunt in about 11.2 seconds at around 131.2 mph.  Its top speed was in the range of 212 mph.

The modern version of the Ford GT is an amazing vehicle in its own right and always turns heads. I am sure it changes opinions of critics who may be so lucky to belt themselves in and take her for a little ride, just as its grandfather did at the 24 Hours of Le Mans some 40+ years ago.

Find a Ford GT40 that you love!