The utter dominance of Chrysler’s brand-new hemi v8 racing engine at the 1964 Daytona 500 astounded NASCAR fans and competitors alike. Plymouths powered by 426-cid Hemis ran to a lopsided 1-2-3 victory at Daytona, with Richard Petty taking the checkered flag in his no. 43 Plymouth after leading for 184 of the 200 laps at a record-breaking average speed of more than 154 mph.

Plymouths and Dodges powered by the 426 Hemi blazed through the NASCAR season to the championship, but competitors from Ford and GM protested: the Hemis were not production engines that a consumer could buy in showrooms, as mandated by NASCAR rules. So Hemis were banned for the 1965 racing year.

But they were back for 1966 as Chrysler started offering 400-horsepower versions of the engine in a number of its high-performance production cars. In the meantime, the 426 Hemi was roaring to record-breaking drag-racing victories in NHRA competition.

For racing fans, the 426 Hemi seemed to come out of nowhere. Indeed, the engine was the result of a remarkable skunkworks effort by dedicated members of a Chrysler team that created the legendary V8 in less than a year. That team was led by engineer and racer Tom Hoover, who now is considered “the godfather” of the Hemi.

“That was a thrilling time, one of the best times of my life, I’ll tell you,” said Hoover, 84, during a telephone interview with ClassicCars.com from his home in Denton, Texas.

In April, Chrysler celebrates the 50th anniversary of the birth of the 426 Hemi performance engine with a special nod to Hoover and his team. The celebration coincides with the centennial of the Dodge brand. While there will be special events throughout the year, the official celebration happens April 11-13 when Mopars at the Strip is staged at the Las Vegas Motor Speedway.

The effort to create the 426 Hemi started in April 1963, Hoover said, when the relatively new Chrysler chairman, Lynn Townsend, announced he wanted to win the Daytona 500 in 1964. With that announcement, Hoover assembled a team of engineers and engine experts to tackle the challenge.

Chrysler V8 engines with hemispherical combustion chambers were nothing new, Hoover said. Chrysler added them to its fleet in 1951 and continuing to offer them through 1958, although their performance potential was largely untapped.

“These engines were not performance engines,” Hoover said. “And upper management always considered them too expensive to build.”

Before the 426 Hemi project, Hoover had been instrumental in the design of the powerful Max Wedge V8 that superseded the first-generation Hemis. Besides being durable and less expensive to produce, the Max Wedge proved to be a formidable challenger in drag racing.

Hoover admits, however, that the Max Wedge’s success came despite its inherent limitations. “They didn’t have a cylinder-head configuration that was very productive in power output, especially at high speeds,” he said. “In spite of all that, we used the base engine, put a ram manifold on it, big ports, big valves, high compression, and so forth, and we were pretty successful.

“Except in NASCAR. We ruled in Super Stock at the drags but in NASCAR, with one carburetor and so forth, it wasn’t really competitive.”

Then the order from the top came down.

“Suddenly, Mr. Townsend said, ‘Gee I would sure like to see us win Daytona Beach in 1964,’” Hoover recalled. There was a flurry of meetings and cost estimates, after which “Mr. Townsend said, ‘I think that’s a good thing to do. Go.’ So we did.”

One reason Chrysler management chose Hoover to head the engine-design teams was because of his personal experience in drag racing after he joined Chrysler engineering in 1955.

“A group of us became familiar with one another at lunchtime and formed the Ramchargers group, and we went drag racing.” The Ramchargers went on to become one of the most-successful and most-famous drag-racing team of all time.

Townsend’s desire to prepare a new engine for Daytona created a very small time window for designing and testing with the big race just 10 months away. While that might not seem like such a tight schedule today, with computers and other modern design aids, Hoover said in those days it seemed next to impossible when the basic tools were “a wooden bore, paper and pencil.”

However, Hoover and the other Chrysler engineers and designers were not without experience in wresting power from a Hemi engine, he noted. There was the design of an engine for Indycar racing, the A311, as well as the success of Hemis on the drag strip.

But this was different, and a much bigger challenge, he said.

“The base engine itself was not really changed for drag racing,” Hoover said. “The (426) Hemi was a different ballgame in which there were basic structural changes to everything.”

Through 1963, the rush was on. Hoover credits Chrysler management with allowing the Hemi-design program to proceed without interference as a team effort. The approach, Hoover said, was taken from the management theories of the acclaimed U.S. statistician Dr. W. Edwards Deming, who was instrumental in forging Japan’s economic recovery from the ruins of World War II.

“The Max Wedge and in particular the 426 Hemi were the first instances of the company’s use of Dr. Deming’s basic approach to things,” Hoover said. “Both of these programs were horizontally oriented, not vertically oriented in the old style, with 15 layers of folks between the grunts and somebody who could make a decision.”

Each member of the team of engine experts was able to express his abilities and take ownership of the Hemi project, Hoover said, “with very gratifying results.”

“We were able to operate in a way in which everybody’s talent and ideas could be applied. Because the people who were involved had ownership in the program, they were willing to do whatever it took to make it successful. It was also great fun, by the way.”

Low-restriction airflow was a key component of the hemispheric cylinder-head design, which allowed larger valves and direct cross flow. But there was an issue with optimizing the placement of the exhaust-valve push rods while still maximizing intake air flow. The solution was found in tilting each cylinder head toward the center, but there was still more refinement required.

“Boy, that was tough,” Hoover said. “For the solution to that one, we went to the great airflow guru, Harry Weslake, over in England. Harry was the guy most people credit with the success of the Rolls-Royce Merlin aircraft engine, without which the Battle of Britain (in 1940) might have gone the other way.” 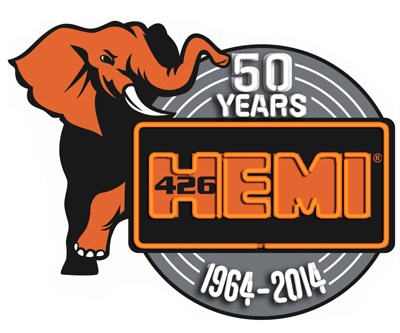 Airflow and durability became the hallmarks of the 426 Hemi, which added the horsepower and reliability needed for NASCAR success, he said.

“We did very well is terms of air volumetric efficiency, the ability of the engine to pump air through the cylinders. Beyond that it could support an awful lot of load.”

The booming success at the 1964 Daytona 500 confirmed everything that the Hemi engine team had been working on, Hoover added.

“I wasn’t even there for the race; the whole thing is kind of a blur,” Hoover recalled. “I went down for the practice and for the qualifying races. Once I was sure that the cars were going to go like stink, I left for Pomona (Raceway) because we were potentially going to run some Hemis at the drags.

“I knew we had the speed. We listened to the (Daytona) race on the radio.”

Nowadays, Hoover is still at it, helping to design engine systems and participating in racing. Only now it’s with his son, Tom, who is an engineer at General Electric Locomotive; they are helping convert diesel train engines to run partially on natural gas.

“We’re running now in Pure Stock, which has been a real gas,” Hoover said. “We’re running a Max Wedge and having an awful lot of fun with it. Pure Stock is kind of the underground of drag racing these days. It’s a challenge to see what you can do on narrow bias-ply tires.”

Hoover will be an honored guest at the annual Mopars at the Strip celebration April 11-13 in Las Vegas, along with several original members of the Ramchargers race team, as Chrysler marks the 50th anniversary of the Hemi racing team and the centennial of Dodge.

For more information about the anniversary party, see MoparsattheStrip.com.