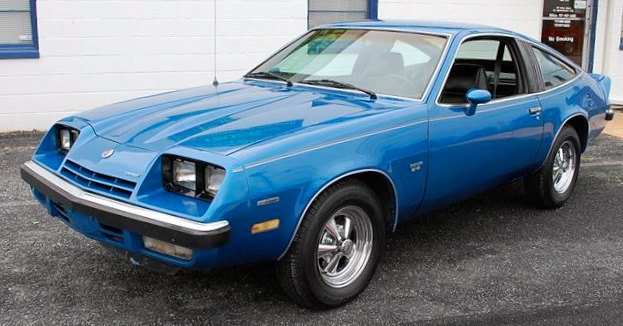 Ferrari-like styling. A name with amazing heritage. Racing provenance that includes back-to-back IMSA Camel GT series championships. And yet the Chevrolet Monza seems to be all but forgotten (so far) among classic car hobbyists. Why, it isn’t even listed in the Hagerty Price Guide and while it is included in Kelley Blue Book classic car listings, even in top condition it doesn’t crack the $6,000 plateau in value.

Maybe this is more of a “Forgotten Classic” than a “Future Classic,” but while the Monza, a stylish if compact coupe powered by a Chevy small-block V8, caught on with racers, their enthusiasm hasn’t been shared by the classic car community.

Borrowing its name from the Corvair Monza of the 1960s, the Chevrolet Monza was introduced as a 1975 model and won car of the year honors from Motor Trend magazine. The Chevrolet Monza shared its underpinnings with the division’s compact Vega series, but it was four inches longer and, with its long sloping roofline over 2+2 seating, looked more like an American version of a Ferrari GTC-4 than just another small car.

John DeLorean, then general manager of the Chevrolet Division, referred to the Monza as the “Italian Vega.”

Oh, and those extra four inches were very important. Originally, the car was designed to carry a rotary (Wankel) engine (you can see the Rotary label on the license plates of the Monza design study in the images above from GM Media Archives), but that effort was scrapped. Instead, the extra space meant that instead of the Vega’s 2.3-liter, 78-horsepower four-cylinder engine, Chevrolet’s 4.3-liter small-block V8, rated at 110-hp or 125-horsepower (remember, this is the mid-1970s), could fit beneath the Monza’s hood — and nearly 25,000 of the cars were V8-equipped in the Monza’s first year of production.

At one stage in the car’s development, Chevrolet had planned to badge the new model as the Chaparral, the name of Jim Hall’s amazing Chevy-powered Can-Am racing cars. As it was, the Chevrolet Monza was eligible for IMSA’s Camel GT racing class.

Racer Horst Kwech and engineer Lee Dykstra launched DeKon Engineering and prepped Monzas for racing in a series in which the primary competition came from Porsche. Kwech and Al Holbert, a racer but also a Porsche dealer, drove the DeKon Monzas to seven IMSA victories in 1976, including a couple of 1-2 finishes. Holbert continued to race the cars in 1977 and he and his various teammates won four more times.

Monzas continued to be successful in club-racing events and in professional racing in Australia.

In addition to the original Ferrari-looking fastback version, Chevrolet added a notchback Monza Town Coupe late in the 1975 model year, but this version was more conventional and even had the Vega’s single headlamps intend of the fastback’s four-lamp face.

A Spyder performance package with stiffer suspension (much like what was standard on all Monzas for 1975) was available beginning with the 1976 model year. Also available that year was the Monza Mirage, a special edition with red, white and blue racing stripes and an aerodynamic body kit with a rear spoiler.

With the demise of the Vega for 1978, a two-door Estate Wagon was added to the Monza model lineup. The V8 option was dropped for the 1980 model year and the Monza itself was dropped from the Chevrolet lineup for 1981 (replaced in 1982 by the front-drive Cavalier).

Princess Diana’s 1985 Ford Escort is up for sale