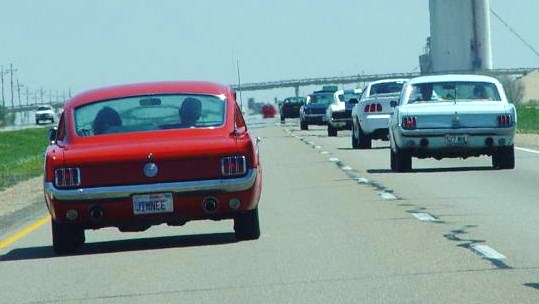 What better way to celebrate the 50th anniversary of the Ford Mustang than getting together with a bunch of like-minded enthusiasts and driving the original pony cars across the United States, with a big birthday party at the end of the trip?

That’s the plan when the Mustangs Across America 50th Anniversary Drive leaves Los Angeles on April 10 and heads for Charlotte, N.C., on a seven-day tour. And this is just one of three cross-country drives that are being called the largest-ever mobilization of Mustangs.

Mustangs Across America is set to arrive in North Carolina in time for the big celebration April 17 at Charlotte Motor Speedway, where the hosts are the Mustang Club of America and the Ford Motor Co. That date is significant: The Mustang was first unveiled to a thunderous round of applause on April 17, 1964, at the New York World’s Fair.

The 50th anniversary party goes from April 16 through April 20 with a number of events and displays for the hordes of Mustang fanatics.

Another celebration hosted by the Mustang Club and Ford happens at the same time at the Las Vegas Motor Speedway in Nevada. The Mustang fun for both parties includes live music, cruises, ride-and-drive opportunities, exhibitions, celebrities and of course, pony rides.

Like the twin anniversary celebrations, the other cross-country tours being organized by the Mustang Club will be mirror-image events. A gigantic herd of Mustangs is expected to gather April 13 in Norman, Okla., where the owners can choose whether to join the eastbound trail to the celebration in North Carolina or head west for Vegas.

“The official Mustang 50th anniversary celebration will kick off in the middle of the country so people can enjoy these pony cars as they were intended to be used: on the road,” said Ronald D. Bramlett, executive director of the Mustang 50th Birthday Celebration.

The Mustang Across America caravan is limited to 500 entries, said organizer and head wrangler Sam Haymart, because of logistics and accommodations along the way. So if you want to take your Mustang and pony up for the trip, you’d better not wait: at last count, more than 450 entries from 28 states and 14 foreign countries had already signed on.

The Mustang Club tours are scheduled for three overnight celebratory stops, with the eastbound group staying in Little Rock, Ark.; Nashville, and Asheville, N.C., and the westbound herd stopping in Amarillo, Tex.; Albuquerque; N.M.; and Flagstaff, Ariz. For more information about those drives as well as the Charlotte/Las Vegas parties, see www.mustang50thbirthdaycelebration.com.

Each of the three drives expects participants to join up and add their numbers to the caravans at the overnight stops.

“We’re expecting 150-200 cars that are starting out with us,” Haymart said. “The others will pick us up along the way.”

Haymart noted that this is not his first Mustang rodeo but the fourth time he has organized coast-to-coast drives marking significant Mustang anniversaries.

The first was in 1994 for the 30th anniversary. He has chosen a 1995 GT coupe to drive as the pace car for 2014 Mustangs Across America to memorialize the then-new 1995 car he drove on his first anniversary tour.

Ford is marking not only Mustang’s 50th anniversary but the launch of an all new kind of Mustang for 2015, one with an international flair. That has caused some consternation within the Mustang community, Haymart said, but he’s good with it.

“I like the fact that it has independent suspension, finally,” he said. “I’m the kind of person who doesn’t mind seeing it get modern. There are a lot of tradition-minded folks out there who think it’s turned into ‘one of them foreign jobs.’ But you can’t please everybody.”

Question of the Day: Who is your favorite NASCAR driver?