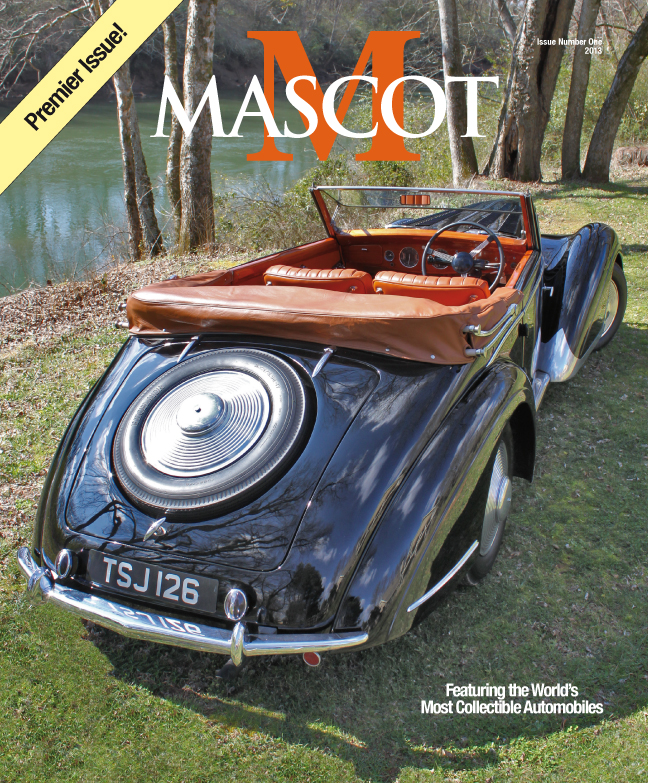 For 10 or maybe it’s been a dozen years, Jim Pixley Jr. has driven to Amelia Island from his home in Atlanta to attend the annual concours d’elegance, the annual gathering of gorgeous classic cars in an island setting on Florida’s northeastern coast. Afterward, he drives home and then searches the newsstand for a magazine that shows the same sort of cars he’s just seen.

“I never could find anything,” he said.

Pixley has been in the magazine business, primarily as an art director, though most recently as assistant managing editor for Veranda, a magazine focused on interior design and which Pixley describes as sort of a southern version of Architectural Digest.

Pixley calls his magazine Mascot and has just published its premier issue.

The magazine spans 96 pages, plus almost cardboard-thick front and back covers. Between those covers are just five articles.

The format, Pixley explains, is to open the magazine with a feature on a specific concours, or on a single class at that concours. In the case of the premier edition, there are 18 pages entitled, “A Day with the Legendary Duesenbergs.”

The rest of the Mascot is given over to coverage of four cars. For the premier edition, they are “The Fire Chief’s Super Eight Sport Phaeton,” “The Mysterious Parisian Delahaye 135M,” “Frank Spring Teaches Hudson’s Jet Italian,” and “The Unexpected Double Life of Rolls-Royce EX44.”

The Fire Chief and Parisian Delahaye each get 18 pages, the Hudson 16 and the Rolls 20.

If he receives enough positive response, Pixley wants to produce Mascot on a quarterly basis. The premier issue is priced at $14.99 (you can buy a copy through the www.mascotmagazine.com website). Pixley knows his cover price is expensive,  and he wants to reduce it as volume increases and as advertising arrives.

Though not too much advertising, he said. What he wants is to showcase the cars, and with as many as 20 pages devoted to each vehicle.

His idea is to present the cars to readers as if they were touring a fine home and its artistic and architectural details, telling the story in words but emphasizing photos that make you feel as if you are in the home — or the car.

Like so many boys, Pixley grew up drawing pictures of cars and dreaming of becoming a car designer. He studied graphic design and fine art at the University of Georgia, went into advertising and then into magazines.

“I want to present these cars as art and to share their beauty with people,” he said. “Every story is different because every car is different.”

Pixley said he chose Mascot as the name for his magazine because “mascots were hood ornaments that went on these rare and unusual cars, and I felt it captured the spirit of the custom coach-built automobile.”

Like the restoration or preservation of a classic car, Pixley said the creation of his magazine has been a “labor of love that I’ve started, and we’ll see where it leads.”