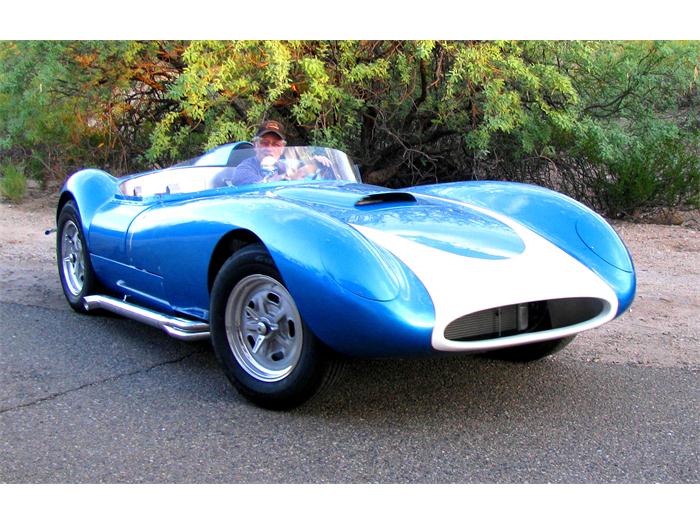 One of the most successful, purpose-built race cars in American history has to be the legendary, Reventlow Automobile’s Scarab.  Named America’s Finest Sports Car by the influential “Road and Track” magazine, this beautifully sculpted, aluminum bodied race car was born in the mind of an amazingly talented young man named Count Lawrence Graf von Haugwitz-Hardenberg-Reventlow (or Lance Reventlow, as he preferred to be known).

Born in 1936, he was the only child of Danish nobleman Count Kurt von Haugwitz-Hardenberg-Reventlow and American socialite Barbara Hutton. He was born at Winfield House in London, which was built by his mother and named for her grandfather Frank Winfield Woolworth who created immense wealth with his chain of stores by the name of F.W. Woolworth’s Five and Dime. His parents’ marriage was a tumultuous one, filled with his father’s emotional and physical abuse of both Lance and his mother, along with his mother’s growing alcohol and drug addiction.

Barbara Hutton, who had inherited the Woolworth department store fortune and was also the daughter of the extremely successful Franklin Laws Hutton of E.F. Hutton fame, was then one of the wealthiest women in the world. The marriage to the Count, Barbara Hutton’s second of seven, did not last and young Lance became the subject of a bitter custody battle. Left to be raised by nannies and boarding schools, Lance Reventlow was six years old when his mother married the world-famous actor, Cary Grant, who took the already troubled boy under his wing. Reventlow’s mother and Grant, unfortunately, divorced on July 11, 1945 and two days later the then nine-year-old was abducted by his biological father and taken to Canada but later returned. Grant remained close to Reventlow, who spent a great deal of time in the Los Angeles area. In fact, by the age of 30, Lance’s mother had been married and divorced a total of seven times.

Given his tumultuous upbringing and fortunate, young Lance had a love for all things mechanical and especially fast cars, racing and airplanes. On a trip to Europe in 1957, with his friend Bruce Kessler, they enjoyed touring all the race venues, renting race cars and even entering a few events. They visited all the top European race factories, including the very successful Cunningham Team’s Lister-Jaguar headquarters. Lance, then 21 years old, saw nothing they were doing in Europe, that couldn’t be done back home in the USA. So he decided to get back to California and start his own racing company. Upon his return home, he immediately set up his company, Reventlow Automobiles, in (Venice) North Hollywood, CA and told his chief mechanic and good friend, Warren Olson, to hire a Dream Team of the best designers and builders of the time to create the race car he had envisioned in his mind, specifically with the idea to beat the big boys from Europe at their own game.

His team, which included the likes of former Kurtis fabricators Dick Troutman and Tom Barnes and engine guru’s Jim Travers and Frank Coon, who would later form TRACO. Lance also called on the help of legendary racer and designer Ken Miles to design the chassis. The final piece of the puzzle was Chuck Daigh, who was hired as both a driver and drivetrain specialist. Lance had one big advantage over the European sourced competition . . . he could build a car specifically for American style stop and go racetracks, which were quite different than their much faster European counterparts.

With this in mind, he asked for a race car that was compact, lightweight and above all, able to put its power to the ground very well. Inspired by the Mercedes-Benz 300 SL, Ken Miles penned a design for a space-aged frame with enough room for Olson and his men to make their own mechanical design interpretations. The suspension was equally advanced with double wishbones at the front and DeDion axle at the rear. Making an American built race car meant he had to make a compromise and use drum brakes instead of the superior British disc brake systems. The only inconsistency, or non-American component, was the Morris sourced rack-and-pinion steering gear.

The very American Corvette V8 formed the basis for the Scarab’s powerplant. Although by the time Travers and Coon were done with the engine, it was a very different beast altogether. The first order of business was to increase displacement from the original 4.6L (283 c.i.) to 5.5L (339 c.i.) by boring and stroking the little V8. The enlarged displacement engine was even equipped with the advanced-design Hilborn FI unit and the intake manifold sported eight very stylish intake trumpets splayed at all different angles. With all these modifications in place, the V8 was good for anywhere between 360 and 385 bhp, most of which was available from very low rpm’s. The engine was then mated to a Borg-Warner 4-speed gearbox, which had a lightweight aluminum casing. An amazingly curvaceous, aluminum body was styled by then 19-year old Art Center school student Chuck Pelly, which rounded off the sexy package. The completed machine weighed in at a very competitive 1,900 pounds.

The very first prototype, dubbed the MK1, rolled out of the garage early in 1958, incredibly, only a few short months after the team had been assembled and was named Scarab. The name, chosen by Lance himself, was in reference to the Scarab dung beetle of Egypt, which was considered sacred in ancient times. Although not immediately successful, by June of 1958 and for many years after, the Scarabs dominated the racing world and even beat the previously dominant European teams, here in the USA, at some of the most famous venues and exciting races of all time. Scarabs were successfully piloted over the following years by such greats as Carroll Shelby and Augie Pabst (When Lance exited the racing scene in 1962, he leased his facility to Mr. Shelby).

Tragedy surrounded Lance much of his young life and early in his career.  He had became close friends with fellow auto enthusiast and promising actor, James Dean. They even competed in club events all around California and on September 30, 1955 Lance was one of the last people to speak to Dean, when they met on their way to an auto race in Salinas CA. Dean was killed a few hours later in his racing Porsche 550 Spyder.

In 1964, Lance married ex-Mouseketeer, Cheryl Holdridge, who was introduced to him by close friend, singer Jimmy Boyd. The couple managed to remain out of the glare of publicity for several years and attempted to carry on a somewhat normal life. An avid Alpine skier, hiker, sailor and pilot, Lance and his wife,Cheryl, maintained a home in Aspen, CO. It was there, in 1972, while looking at an area to build a ski resort with real estate brokers and an inexperienced young pilot, Lance’s promising young life of only 36 years, would be cut short. According to the NTSB report, Lance was a passenger in a Cessna 206 and unknown to him (Lance was a fully rated instrument, multi engine, commercial pilot with thousands of hours under his belt) the Cessna’s pilot was an inexperienced 27-year-old student who flew into a blind canyon and stalled the aircraft while trying to turn it around. The small plane plunged to the ground, killing Lance Reventlow and all others aboard.

Stay tuned to see “Part 2”, the future of the awesome Scarab automobile…..