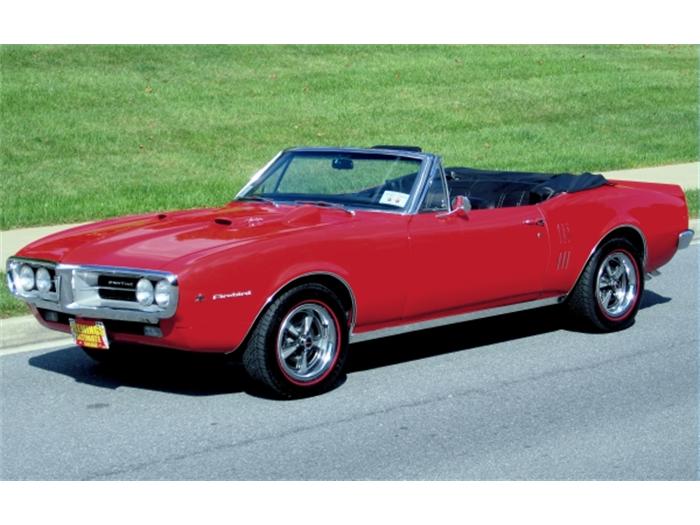 The first generation Pontiac Firebird (1967 to 1969) offered two different design options to consumers: a 2-door hardtop coupe and a convertible model. This new vehicle made by Pontiac, shared the new General Motors “F-Body” chassis with its also new for 1967 sibling, the Chevrolet Camaro. The debut of the Firebird marked Pontiac’s entry into the popular Pony Car arena.

See all Pontiac Firebirds for sale

The new Pontiac Firebird had a 108.1-inch wheelbase, weighed in the area of 3,000 pounds and showed up on the scene some five months after the Camaro made its debut. This short delay helped John DeLorean (who was, at the time, the youngest head of a division in GM’s long history) and his team of Pontiac designers and engineers, put some distinguishing touches on a vehicle who’s design closely mirrored that of the Chevrolet Camaro.

Apparently, John DeLorean was somewhat annoyed that the Camaro was released first, because the new Firebird was one of his pet projects that he hoped would be as popular as the 1964 Pontiac GTO that he also engineered, which is often referred to as the first Muscle Car.

The 326-cid V8 model with a two-barrel carburetor capable of producing about 250 hp, was also an option. Next in line was the Firebird V8-H.O. (High Output) model which also featured a 326-cid V8 with a 4-barrel carburetor rated at 285 hp.  At the top of the heap was the 400-cid V8 (borrowed from the GTO) with a 4-barrel carburetor that was capable of producing at least 325 hp.  Another option was the 400-cid, “Ram Air” engine which contained a tuned camshaft with heavier valve springs, making the otherwise non-functional hood scoops, functional. This engine design modification was not reflective of any additional horsepower output in any of the marketing brochures for the Firebird at the time. Subsequently, this option was rarely ordered, also making it an ultra rare option to find in today’s classic car buyer’s market. Ultimately, all V8’s came standard with the heavy-duty 3-speed manual transmission, with an optional 4-speed manual transmission and 2 or 3-speed automatic transmission.

The 1968 Pontiac Firebirds saw little change from the 1967 models. Some noticeable differences were the loss of door vent-windows and some minor interior revisions that were made. Pontiac “Arrowhead” side-marker lights were added to the rear 1/4 panels and the front turn signal/parking lamps were revised to curve around to the sides of the vehicle for the 1968 Pontiac Firebird, new federal vehicle laws that were implemented in 1968.  The rear shocks were also staggered  on the 1968 Pontiac Firebird, with one mounted to the front side of the axle and the other to the rear side of the axle, in an effort to increase ride quality.  The rear leaf-springs were also changed to the “multi-leaf” design, in order to reduce annoying “wheel-hop” upon quick acceleration. Most of the other changes, were in the available drivetrains, such as the “OHC” 6-cylinder, that grew from 230 to 250-cid and the 326-cid V8 that grew to 350-cid, both producing increases in horsepower production.

The Pontiac Firebird had a major facelift in 1969 (similar to the new GTO), with a new front end design. The rear-end area was changed slightly, while the interior was again revised and an exciting new Trans Am performance and appearance package was introduced in March of 1969. The Trans Am name, which was borrowed from the SCCA racing series, also meant that Pontiac had to pay the SCCA a license fee of $5.00 for every car sold, in order to use the Trans Am name. All the Trans Am optioned vehicles produced in 1969 (only some 689 coupes and only 8 convertibles, again super rare) were polar white with blue racing stripes. A 5 foot long trunk-lid mounted low-profile spoiler, special decals and the exclusive hood with driver operated, functional intake scoops, were included in the package. Also exclusive to the Trans Am, were the front fender scoops or vents, which were intended to help evacuate captured, engine-bay air.