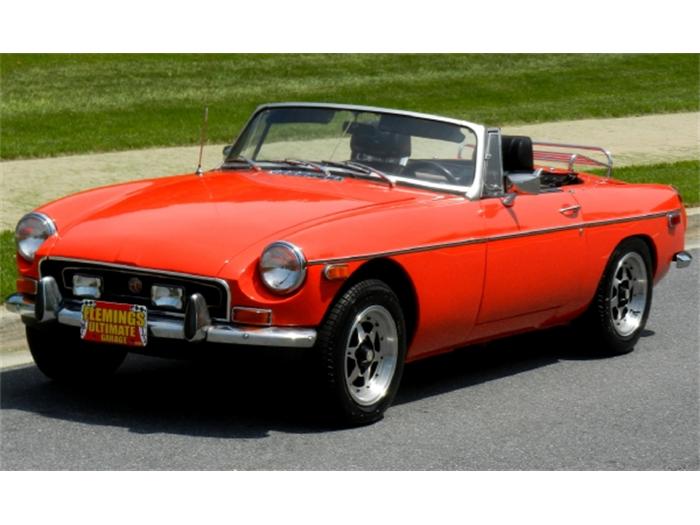 MG is the moniker for “Morris Garages” of Oxford, England, which began in 1924 or 1925 at a dealer of Morris brand vehicles. The discrepancy regarding the actual year that MG was established varies according to which historical records about the company one refers to. MG modified different Morris brand vehicles into various special sports car style bodies.  The emblem for MG was created in March 1928, officially establishing the brand.

See all MG MGBs for sale

Sir William Morris, an engineer and Cecil Kimber, a designer, co-founded MG. The MG brand lasted for more than 50 years, surviving a number of changes in ownership, as well as a number of mergers between 1924 to 1980. The brand continually produced vehicles during its lifetime, with the exception of the WWII era, when all manufacturing efforts were focused on the war.  The MG brand also survived the loss of one its co-founding members, when Kimber died in an obscure railway accident in 1945.

MG released the first, of their last series of sports cars to be made in 1962, the venerable MGB models. The first MGBs, referred to as MkIs (1962 to 1967), were all 2-door roadsters with convertible soft-tops and 1798cc, 4-cylinder engines and rear-wheel drive.  In 1966, MG released a 2-door hatchback coupe with 2+2 seating, called the MGB-GT. This model also featured the 1798cc 4-cylinder engine, a trend that lasted through 1974 in the U.S. market and continued through 1980 in Europe.

The MGB-GT soon spawned another vehicle in the MG line-up, the MGB-GT V8. This vehicle was designed to compete with the more powerful vehicles of the day. It featured a shoe-horned version of the Buick/Rover designed, 215-cid, V8 engine. This model was only produced for 3 years, from 1973 to 1976,  with very few units actually crossing the “pond” and landing in the states. MG also went so far as to release a version of the roadster called the MGC for a short period of time (1967 to 1969). The MGC featured a 2912 cc, in-line 6-cylinder engine, which was an ill-fated design that offered lackluster performance and handling due to the added weight of a V6 engine.

The MkII MGBs were produced from 1967 to 1971 with the 1798cc, receiving several upgrades along the way, including: dual master-cylinder brakes, negative earth (ground) electrics, an alternator instead of a generator, a fully synchronized transmission and an automatic transmission option (mainly in the European market).

The MkIII MGBs were produced from 1971 to 1980, remaining basically unchanged, with the exception of several minor upgrades to creature comforts, which were for the most part considered detractors for an otherwise nice looking little sports car. For instance, in 1974 a large, rubberized front and rear bumper fascia was added to comply with new safety laws that were imposed, which dramatically diminished the sleek look that previously existed when chrome components were still being used for the bumper assemblies.

The MGBs were innovative at their time of inception with their unique monocoque chassis design, making them lighter, stronger and even less expensive to manufacture. Most other vehicles of the time were based on the tried-and-true body assembly bolted to a chassis/frame assembly. They had plenty of legroom and were actually quite comfortable, even for taller people. Performance was snappy with a 0 to 60 mph rating of just over 11 seconds and handling was superb with good, balanced weight distribution.

Front braking chores were handled by more than adequate 11-inch disc brakes, with Girling dual piston calipers, rear were standard drums. Electrical system components were mainly supplied by the Lucas Electric Company (affectionately referred to as the “Prince of Darkness” by those of us who have had a love affair with these great little cars over the years). In terms of safety, the MGBs were some of the first production cars to incorporate “crumple-zones” into their body design in order to protect passengers in the event of an impact with an immovable object at 30 mph.

The last MGB units rolled out of the Abingdon Factory in 1980, after which the company closed its doors forever. Overall units manufactured in the entire run of the combined MGB models was 523,836 in just over 18 years. The U.S. market was largely responsible for the demise of the MGB. Our ever changing safety laws and emissions regulations were forced on all manufacturers, which many times reduced horsepower ratings and added weight; two things that don’t bode well with sports cars.

MGBs were (and still are) raced very successfully in many events, venues and series including the Monte Carlo Rally, winning the GT category at Sebring in 1964. MGBs also won in 1963, 1964 and 1965 at the grueling LeMans 24 Hour endurance race while beating many more powerful vehicles at the same time. These affordable classic cars are readily available on the market today and are a big bang-for-the-buck.