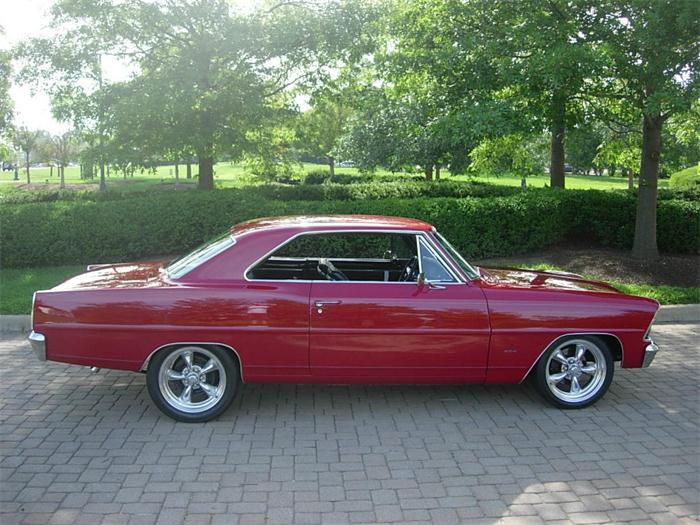 The Chevrolet Chevy II or Chevy II Nova (later just Nova), was one of the quickest, concept-to-production new vehicle projects to be produced by the General Motors Corporation. It was only 18 short months from inception to the first unit rolling off the assembly line on August 16th, 1961. It was barely in time for its release to the public in September, as a 1962 year model.

See all Chevrolet Novas for sale

This was all done in order to compete directly with the now popular, Ford Falcon, a compact car which had become a major success for the Ford Motor Company shortly after its debut in 1960. The Nova quickly became a fierce compact car competitor with four-door sedans, station wagons and they even offered a two-door hardtop and convertible, ahead of the Falcon’s release of those same models. According to Ed Cole, GM’s General Manager of the time, the Chevy II’s mission was to be a back-to-the-basics, simple and affordable vehicle for the masses. He described it to the press as offering the buying public “maximum functionalism with thrift!”.

The name, Nova, was (internally, at Chevrolet, anyhow) a popular choice to represent the new model (but at first, Nova, was only used on their top-of-the-line models), but again, with keeping its new models tied only to names beginning with the letter “C”, it was last minute, when they finally settled on the “Chevy II” name. There would be five generations of the Chevy II or Nova models, ranging from 1962 through 1988, with a brief hiatus from 1980 to 1985. The fifth generation Nova, made from 1986 through 1988, was actually a sub-compact, re-modeled, re-badged, front-wheel-drive vehicle produced as a joint effort between GM and Toyota, and based on their Sprinter model. The Chevy II name was dropped after the 1968 year model and was afterwards, known as the Chevrolet Nova through the end of its run.

The base of the Nova’s through 1979 (the end of the fourth generation run) was a rear-wheel-drive vehicle of unibody construction. Over the years, you could have ordered your Nova with anything from a 153-cid in-line, 4-cylinder (later models, 1975 to 1979, carried the Iron Duke 151-cid in-line, 4-cylinder) to a 402-cid Big-Block, V8 and pretty much everything in-between. What a gas these sleeper cars could be with a little creative “tuning”.

The first generation Chevrolet Chevy II (Nova) ran from 1962 through 1965 and saw the first V8 powerplant available from the factory in 1964, a 283-cid unit, producing 195 hp. It was, however, commonplace in 1962 and 1963 to have a dealer installed V8, placed under the hood. The 1965 received a bit of a facelift and some more ponies, due to various engine options now available, including the SS models, 300 hp, 327-cid Small-Block V8 making the little compact a real musclecar contender. The standard transmission was the 3-speed, on-the-tree manual, an optional 4-speed manual transmission (sometimes dealer-installed) and 2-speed Powerglide automatic transmission.

The second generation Chevrolet Chevy II (Nova) experienced the shortest run of all five generations and ran from 1966 to 1967. They came with a more modern, angular looking body shape (including a semi-fastback roofline) and squared-up styling than the previous models. However, most other features, as offered on earlier models, changed very little and basic dimensions were about the same. The 1967 NovaSS, option package, was the first model of the line to drop all “Chevy II” badging, even though the model was still referred to as the Chevrolet Chevy II.

The third generation Chevrolet Chevy II (Nova, X-Body) enjoyed the longest production run of all the generations and stayed around from 1968 through 1974. A complete, extensive, frame-up re-design came for 1968 and carried-on, basically unchanged, through the end of the series in 1974. The front end housed the newly designed GM sub-frame assembly (similar to that, which was used, on the new Chevrolet Camaro for 1967) comprised of both the front suspension and powertrain, which was then bolted to the chassis of the vehicle. The station wagon (due mainly to lack of interest) and hardtop sport coupe models were discontinued and would not return. Some available options included power steering and brakes, rear shoulder safety belts and head restraints, and Four-Season air-conditioning.

For 1969, Chevrolet finally decided to drop the “Chevy II” nameplates and badging and now their compact car was officially known as, simply, the Chevrolet “Nova”. The four cylinder powertrain was dropped from the lineup for 1971 due to lack of sales and the 250-cid, L6, became the base powerplant. The 3-speed manual transmission and 2-speed Powerglide were still offered standard, but the 3-speed Turbo-Hydromatic automatic and 4-speed manual transmissions were available on most V8’s.

1970 would be the last year for the venerable “SS396” Nova’s, while they were actually increased to 402 c.i. displacement to help meet emissions standards, but due to its strong “SS396” name recognition and to downplay power output to relieve pressure from governmental scrutiny and insurance companies ever increasing premiums, Chevrolet chose to keep the “SS396” badging. A Rally Sport package was offered for 1971 and 1972 which included suspension upgrades, some Rally wheels, special striping and trim options and the largest engine available was now the 350-cid V8.

For 1972 an optional sunroof could now be ordered as well as Strato style bucket seats with built-in headrests. 1973 saw a minor facelift with a hatchback rear glass area, and once again, to conform to the government mandates to have energy-absorbing, 5-mph bumpers front and rear. For the first time, since 1962, a multi-leaf rear spring (like those used on the new Camaros) would replace the single-leaf type. We would also say goodbye to the long-running, 2-speed, Powerglide automatic transmission. For 1974 the Chevrolet Nova would receive some minor exterior upgrades including larger parking lights and even larger, impact-absorbing bumpers for safety sake (actually adding over two inches of length to the vehicle). The 2-speed Powerglide automatic transmission was now replaced by the 3-speed Turbo-Hydramatic automatic transmission.

The fourth generation Chevrolet Nova (X-Body) would last from 1975 through 1979 and would be the makers most-changed model in its lineup for 1975. With all new sheetmetal “refined along the lines of elegant European sedans” stated in the brochure, but keeping some of the third generations rear suspension components and the same 111-inch wheelbase. The front suspension was similar to that used on the second generation Camaro, with larger diameter stabilizer bar, front disc brakes now came standard and radial tires were used all the way around. Windshields had larger glass area, while coupes and hatchbacks had fixed rear-quarter glass or optional swing-out hinged glass. The new LN (Luxury) models featured creature comforts never before seen on a Chevrolet compact car.

For 1976 the “LN” model was re-badged as the “Concours” to compete with other brands more elegant sounding names (i.e.: Monarch, Granada, etc.) and boasted such lavish appointments as Rosewood vinyl woodgrain interior trim, the first Chevrolet coupe to offer fold-down front, center armrest and it even had an upright, sprung, hood ornament. All other changes throughout the end of the run were merely cosmetic and or diminishing in power and performance. The 1979 Chevrolet Nova would bow to the age of front-wheel drive vehicles and the likes of the Chevrolet Citation.

The fifth generation Chevrolet Nova (1986 to 1988) just one word . . . Forgettaboutit. That’s a story for another generation (no pun intended).

Find a classic Chevrolet Nova that you love!