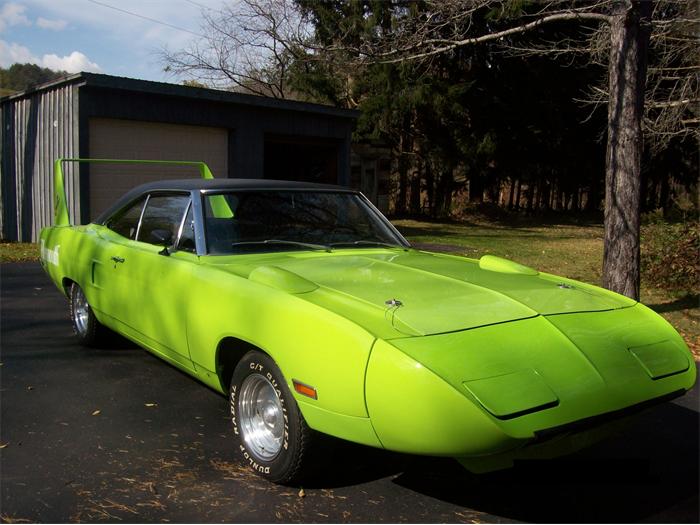 The 1970 Plymouth Road Runner Superbird is hailed as the “holy grail” of Plymouths and the most sought after of their line of raw-powered Muscle Cars and have sold for several hundred thousand dollars. The Superbird actually exists, largely due to the strong requests (actually demands) of then NASCAR champion, national hero, racing celebrity and multi-talented winning driver/owner, Richard Petty, honorably dubbed “The King”, by his peers.

See all Plymouth Superbirds for sale

Petty had always been a staunch Plymouth man, but in 1969, after being denied a Plymouth version of the 1969 Dodge Charger Daytona “winged” production race-car, he left Plymouth and defected to Ford’s Racing Team (a move which was devastating to Plymouth’s Racing Team at the time). The Plymouth Racing Team would take this act to heart and scrambled to provide “The King” with what he wanted, and at the time needed, to win in the NASCAR series for 1970. Even though NASCAR changed the rules for competition in 1970, from 500 production units for 1969, to one unit for each manufacturer’s dealership in the U.S.A., this would mean that they would now have to build 1920 units (records show that some 1,935 units were actually produced, give or take). Plymouth wanted Mr. Petty back and pulled out all the stops to make that happen in 1970 . . . they did and it worked.

“The King” and his new winged-warrior, the Plymouth Road Runner Superbird, were a force to be reckoned with on the circuit for 1970 winning 8 races during the season and placing highly all year. Unfortunately, due to excessively high speeds achieved and for safety reasons, the powers-that-be at NASCAR were forced to make a decision and this would be the first and last year that these winged vehicles would be allowed to race (with the large displacement engines) in the series. Even though the cars were still eligible and even legal to race body-wise, they were forced to reduce engine displacement to no more than 305 c.i. This rule change, pretty much rendered them non-competitive due to poor power-to-weight ratios that were, well, sickly at best.

But, for that one glorious season, the engineers at Plymouth put their heads together and came up with a design utilizing the front-end of their Coronet models with a huge, yet aerodynamic sheet-metal “beak” attached to it and grafted to the “B-body” of a Road Runner chassis. Also, after redesigning the rear-window and body area (note: all Superbirds came with a vinyl roof to cover the metal-working “scars” left from the installation of the flush-mounted rear glass) and by adding over 40% more surface area (than the 1969 Dodge Charger Daytona) to the stabilizer portion of the aluminum wing and tilting it farther to the rear of the trunk area, they were able to achieve the desired aerodynamic results. The wing was also made a bit taller to aid in clearance of the trunk lid, when opened. However, the huge, rear wing was basically useless at speeds under 90 mph, and other than the love-it or hate-it relationship that the general public had with the winged look, it was rarely ever functional at legally posted speed limits.

The 1970 Plymouth Road Runner Superbird (all were 2-Door Coupes) was very similar to their line of high-end GTXs and its drivetrains were similar in offerings.  The standard package included the 375 hp, 440-cid Super Commando V8 with a single 4-barrel Carter carburetor (approximately 1,084 units were made).  Upgrades were either the 390 hp, 440-cid Plus-Six Super Commando Six-Pack V8 with three 2-barrel Holley carburetors (approximately 716 units were made) or the amazing 425 hp, 426-cid “Hemi” V8 with dual-quads, two 4-barrel Carter carburetors (of which only 135 some-odd units were made, again, record keeping in those days was a bit sketchy at best).

That’s a lot of power for a production vehicle, which could be bought right off the lot at your local Plymouth Dealership. These powerhouses were coupled to either a four-speed manual transmission complete with a super-cool pistol-grip shift knob or a TorqueFlite 727 automatic transmission with either column mounted or floor-console shifter. (note: the above production totals are per Chrysler Historical records of street vehicles produced, but are again, sketchy at best and in constant debate as to their validity).

The Superbird used the Road Runner’s “Rallye” style dashboard with full instrumentation, a 150 MPH speedometer, a tachometer and even a clock. However, no air-conditioning, rear window defogger or Ram-Air hood option was available. They did come standard with power-assisted front disc-brakes, rear-facing front fender scoops (which were mounted on the top of the fenders and were there to evacuate air that may get trapped in the wheel wells, as well as, to aid in cooling of the brakes), split over/under tail lights and of course all those cool “Road Runner” cartoon-character decals. They showed the famous bird holding a racing helmet within a circular “Road Runner Superbird” lettering surrounding it (one small decal on the left front headlamp door and a substantial sized one on each side of the rear wing) and a huge “PLYMOUTH” decal on each of the rear 1/4 panels. The car weighed 3700+/- pounds and was 221 inches in length (over 18 feet), 76.4 inches wide, 61.4 inches high and had a 115.8-inch wheelbase.

The Superbird’s winged styling seemed to be a bit much for the general public, not to mention their $4,298 base price tag.  As awesome as the car was on the track or to the people who absolutely loved them, they did not sell well and many dealers were left holding onto them for as long as two years later. It is rumored that some of them were even changed back into standard looking Road Runners and sold sans beak and winged tail-section.