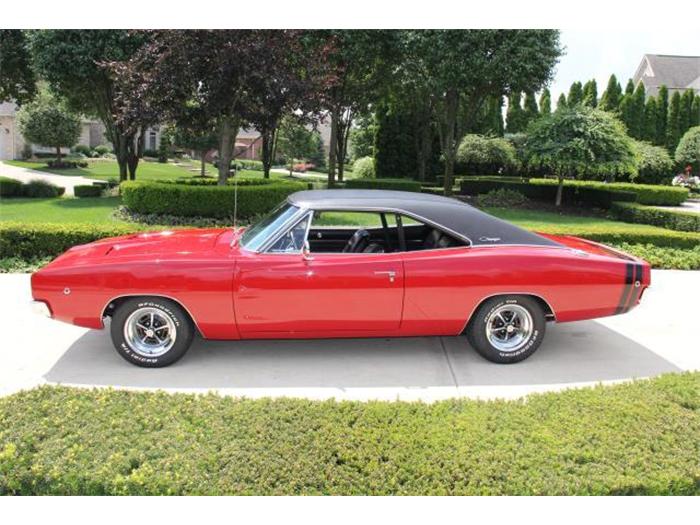 The second generation 1968 Dodge Charger was a complete redesign based on the mid-sized chassis (or B-Body with 117-inch wheelbase).  All 1968 Chargers were two-door, fastback coupes (the fastback was much toned-down compared to previous models). They, however, retained their signature blacked-out front grille with hidden headlamps. The former mechanical, rotating headlamps were replaced by a vacuum operated, “eyelid” type lamp cover instead. Also, the former body-wide, tail light panel was revised and replaced with a pair of dual round lamps at either end (outlined in chrome trim).

See all 1968 Dodge Chargers for sale

The doors and hood each contained a pair of racy-looking indents (faux wastegates if you will) with rear facing “tails” or “sweeps” which made the car look like it was going fast, even as if it was standing still. Both front fenders and rear quarter panels were rounded out and gave a bulbous, muscular look to the whole car. The chromed, racing style, “quick-fill” gas cap was located on the upper rear quarter panel. The new fastback body backlight was inset and had a rearward swooping panel that led into the trunk and quarter panel area on each side.  It bore the resemblance of the trailing-wing or “flying-buttress” styling cues of the day.

The 1968 Dodge Charger started out with a base 318-cid V8, 230 hp (rated), 2-barrel carbureted engine.  Later in the production year the venerable 225-cid “Slant” 6-cylinder with 1-barrel carburetor was also made available. The 383-cid big-blocks in both 2-barrel, 290 hp (rated) and 4-barrel, 330 hp (rated) were carried over from the 1967 first generation Dodge Chargers.  A new R/T (Road/Track) version came standard with a 440-cid Magnum V8 and a 4-barrel carburetor pushing 375 under-rated hp. Of course, as if that wasn’t enough, you could still opt for the awesome 426-cid Hemi V8 with two-4 barrel carburetors producing in excess of 425 hp (again under rated and only a $605 option at the time).

Dodge pulled some extra muscle power appeal from their war chest for 1968 R/T’s and announced the Scat Pack option, which included heavy duty suspension and brakes; special rear trunk bumble bee striping (wrapped around the rearmost area from side-to-side); a double wide racing stripe outlined by two thinner stripes and a special decal with a muscular looking bumble bee that had a V8 strapped to its back. The Torqueflite “727”automatic transmission came standard and mounted in the floor console with the option of a four-speed manual linked to a Hurst shifter.

The 1968 Dodge Charger had an all new “space-age” looking interior with many new safety features (some federally mandated and others just for sake of innovation). The cockpit style gauges were placed in front of the driver and angled for easy viewing at any speed. A tachometer was optional and the rallye style clock was standard.

The sporty looking door panels carried new map pockets (or ticket collectors, as the case may be). The front seats had safety latches to allow easy access for rear seat passengers. It also prevented the seats from unintentionally folding forward, especially in the case of impact. The ashtray was tucked into the dash for safety and the center of the steering wheel was padded (also for the unfortunate event of an impact). There was a new power window safety lockout switch to prevent accidental finger crunching. The ignition also had to be turned on for the windows to operate at all. Front seat head restraints were provided and seat/shoulder belts all the way around (at least at the driver and passenger sides, front and back, center rear lap only). Instrument padding was extended to cover the knee area of the steel dash for added protection. To help aid rear visibility, a rear-window defogger was added. There were 6 basic interior colors and 17 exterior colors and an optional vinyl top which was ordered on three out of four units.

Some 96,100 Dodge Chargers were produced, far more than the estimated 35,000 they thought they would need to build. Of those, only 470 units were built with the Hemi engine option. Wow, no wonder they are such desirable vehicles in today’s marketplace. The Hemi version was capable of 0-60 in 5.3 seconds and run through the 1/4 mile traps in 13.8 seconds at 105 mph. Not bad for a car that weighed over 4,300 pounds. Man, those were the days, and I for one, am lucky and proud to have grown up in that era! Dodge stated that “This is no dream car. It’s a real ‘take-me-home-and-let’s stir-things-up-a-bit’ automobile.”