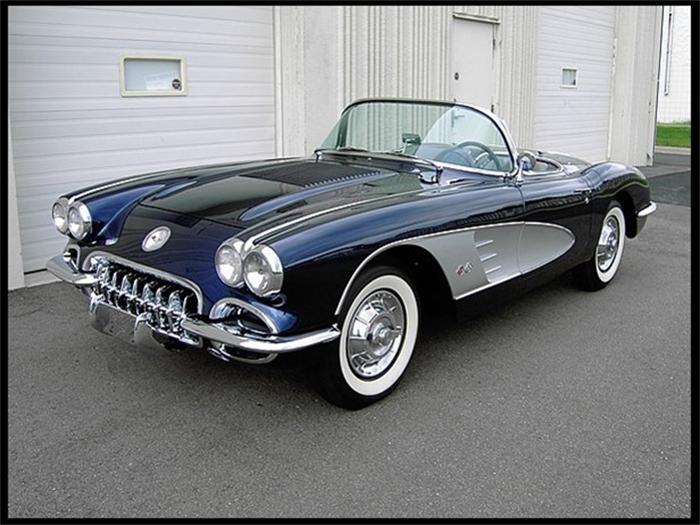 The 1958 Chevrolet Corvette was only available as a 2-door convertible model, with few options available over the base model offerings. The larger-sized body (restyled, updated and enhanced) and more aggressive looks, included adding over 200 lbs. to the total weight of the Corvette. This was the first production Corvette to weigh just over 3000 lbs.

See all 1958 Chevrolet Corvettes for sale

To keep with the styling cues of the era, the 1958 Chevrolet Corvette had the quad style headlamp effect added to the front fenders and a 9 tooth “shark-look” grille, (previous models had a 13 tooth grille). The hood received some “faux” louvers and the trunk was adorned with twin chromed trim spars, running tip-to-tail on the trunk lid. Both of these effects were specific only to the 1958 models. Both front and rear bumpers were now attached to the frame instead of directly to the body, which greatly increased their strength and protection factors. The eight available body paint colors were changed from the old enamel system to a new acrylic lacquer paint for a better finished look.

The interior of the restyled 1958 Chevrolet Corvette was also refined. The instrumentation was now placed directly in front of the driver and included a stacked arrangement of a 160 mph speedometer on top of an 8,000 rpm tachometer (which replaced the previously utilized 6,000 rpm unit) and a complete set of gauges . A grab bar for the passenger to hang onto in stressful driving conditions was added and a pair of (now factory installed) seat belts was standard.

The suspension included:  independent A-arm with coil springs, anti-sway bar up front and a solid, live axle with semi-elliptic leaf springs in the rear (both front and rear handled by tubular hydraulic shock absorbers). Engine availability was left to the venerable 283-cid small-block in five different variations: a single 4-barrel carburetor producing about 230 hp, two different versions with dual 4-barrel carburetors which produced either 245 or 270 hp (depending on tuning and components), and two different versions of the “Fuelie” or fuel-injected units producing either 250 or 290 hp (depending on tuning and components).

Three transmission types were available: the (optional) 2-speed automatic “Powerglide”, the (standard) three and (optional) four-speed manuals. The brakes were 11-inch drum style front and rear with optional heavy duty Cerametallic linings and racing suspension package. Performance ratings for the 250hp version was 0-60 mph in 7.6 seconds and could run through the 1/4 mile traps at 90 mph in 15.7 seconds!

In 1958, 9,168 Chevrolet Corvettes were produced, making it the largest number of units per model year- to-date. It was actually reported to be the first year that Chevrolet made a profit on the model. Some other notable options, not mentioned above, were a heater (go figure), signal seeking or “Wonderbar” AM radio, auxiliary hardtop, power windows, power operated folding soft-top and posi-traction rear axle in three different ratios.

The 1958 Chevrolet Corvette was an impressive performance package (wheelbase of 102-inches, an overall length of 177.2-inches, an overall width of 72.8-inches and height of 51.1-inches) for around $3,500, especially when compared to the more expensive Euro-Brands of the day. Unfortunately, due to the “Automobile Manufacturers Association” anti-racing mantra, which had been established in 1957, Chevrolet down-played the many racing successes of the new for 1958 Corvette.