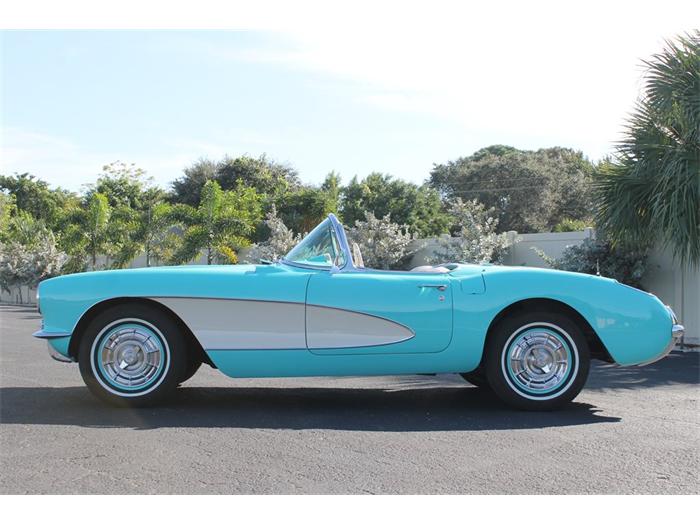 Visually, the 1957 Chevrolet Corvette remained nearly unchanged from the 1956 version. However, underneath that sexy fiberglass body, changes were brewing that would further solidify the Corvette as a true American sports car and icon that was here to stay.

See all 1957 Chevrolet Corvettes for sale

Some of the new additions for 1957 were a long awaited, four-speed manual transmission (the soon to be infamous, nearly bullet-proof, Borg-Warner T-10), a Rochester Ramjet mechanical fuel-injection unit and the small-block V8 engine displacement was increased to 283-c.i.. This mighty little small-block was now capable of producing a walloping 283hp (actually produced closer to 290hp with fuel injection and special tuning).  This was heavily promoted by Chevrolet, as a first in mass-production engines, to have a one-horsepower per cubic-inch displacement rating (they were, actually, a year behind Chrysler Corporations release of their 354-cid, 355 hp, Hemi V8 engine). Base price for the 1957 Chevrolet Corvette was only $3,176.32.

As far as the exterior goes, Inca Silver was added to the previously available body color choices of Onyx Black, Polo White, Arctic Blue, Aztec Copper, Cascade Green and Venetian Red, which combined, equals 6,336 units, but actual production total posted by Chevrolet was 6,339 (which again, shows how lax the bookkeeping was way back then). This may sound like a small number of total vehicles produced, but it is about twice as many as were produced in 1956. This is due to the marketing of the performance and handling advancements and results of racing victories of 1956 and 1957 combined.

The two-tone exterior paint option was still available. The same three colors were available for the convertible soft-top, White, Beige and Black. Aside from opening the hood, one of the easiest ways to visually identify a 1957 Corvette from a 1956 is the means of adjustment method of the inside rear view mirror. The 1956 is adjusted by means of a thumbscrew, while the 1957 version requires a small wrench to adjust it. The optional removable hardtop and power operated folding convertible top were still available.

Interior Updates were minimal as well for 1957 and Beige and Red were the only color choices available. Options still available were the fresh-air type heater system, Signal-Seeking AM radio, parking brake alarm, interior courtesy lamps, windshield washers and power windows. The main dashboard area was unchanged and the passenger area was left alone as well.

Major changes were made to the chassis and drivetrain in the 1957 Chevrolet Corvette. These areas were mainly focused on by Zora Arkus-Duntov and his team of Corvette engineers to answer the shortcomings of power, performance and handling of the previous models, by all the critics of the day. In the engine bay, the Corvette was now powered by a base 283-cid, 220 hp, single 4-barrel carburetor, small-block, V8 engine. The transmission duties were handled by the standard, three-speed manual unit or optional Powerglide automatic unit until about April, when finally, the Borg-Warner T10 four-speed manual transmission became available.

Also, a first for 1957, was the availability of Chevrolet’s new Posi-Traction (or limited-slip) rear axle, which was available as an option in different ratios. The front suspension was still handled by independent, unequal length A-arms, coil springs, anti-roll bar and tubular hydraulic shock absorbers. The rear suspension was again, comprised of a rigid, live-axle, supported by semi-elliptic leaf springs, an anti-roll bar and tubular hydraulic shock absorbers and the rear axle ratio of 3.70:1 was still the standard offering. Tires remained of the 6.70 inch x 15 inch size and rims were 5.5 inches wide. Wide-Whitewalls were still an available and popular option. The 11-inch Bendix drum brakes were carried over and used front and rear.

Several optional versions of the 283-cid, V8 were also made available, from a 245 hp, dual 4-barrel carburetor to a 270 hp dual 4-barrel carburetor. In the new fuel-injected, equipped versions, were several different configurations of the new 283-cid, V8 engine, including: a 250 hp FI or a 283 hp FI and a special “for race only” version also rated at 283 hp (but actually closer to 290hp). The race version also came with a steering column mounted tachometer and cold air induction system. Chevrolet informed all interested customers that these special, VIN coded EN, “for racing only”, models were indeed for racing purposes only and would not be supplied with a heater system. The other “racing only” option was a “special heavy duty” racing suspension, which included such things as heavy duty springs, quicker steering ratio (reducing lock-to-lock turns from 3.6 to 2.9), thicker front anti-sway bar, enlarged piston shock absorbers with firmer valving, and finned/ventilated brake drums with ceramic/metallic compound brake linings for better stopping power. Combine these two factory race options and you have yourself an off-the-lot, race ready and truly competitive machine.

So, no matter what configuration you purchased the 1957 Chevrolet Corvette with, it was truly an awesome performance machine that would only get better over the years to come and today is one of the most desirable C-1’s ever produced.