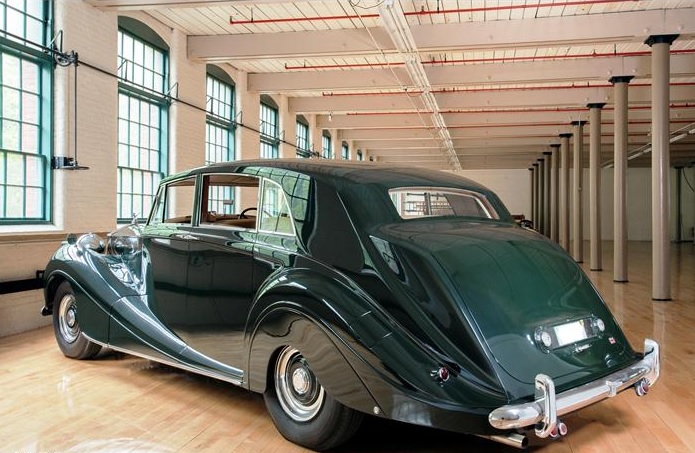 The Rolls-Royce Silver Wraith models were part of the post WWII era resurrection and rebuilding of the automobile industry in Europe and were produced by Rolls-Royce, LTD at their “Bentley-Crewe” plant located in Crewe, Cheshire, England. The “Silver Wraith” moniker was first introduced in 1946, as new for 1947 models and would last through the 1959 model year. The 1954 Rolls-Royce Silver Wraith was one of only a handful of the long wheelbase (133 inch) models built over the 13 year production run, where only about 1880 total vehicles were produced, of which around 639 were of the long wheelbase version (approx. 1/3 of the total production run).

The large displacement, in-line, 6-cylinder engine was increased to 4,887cc for 1954 and was coupled with a General Motors designed, four-speed automatic transmission, and had a live-axle, rear-wheel drive setup with semi-elliptic springs. Hydraulic brakes were now used on all four wheels and the front suspension was of the independent type with coil springs. All the press was continually impressed with whatever came from the Rolls-Royce factory and one even stated the following in trying to sum it all up: “All the world knows that Rolls-Royce carry on an unremitting search for engineering perfection in everything they undertake. The qualities which made their aircraft engines famous, and their cars the finest procurable, are the result of scientifically conducted engineering research and of painstaking attention to detail.”  And now a new range of cars is about to appear it is believed that the new cars are the best that Rolls-Royce have ever built.” Brilliantly said, Ol’ Chap! “Rolls-Royce Motor Cars” also boasted . . . “In common with all Rolls-Royce cars, the Silver Wraith has an indefinable something about it, a delicacy of behaviour, which escapes definition in written words. It is a car for the connoisseur in cars”!

Click to see all Rolls Royce’s for sale on ClassicCars.com.