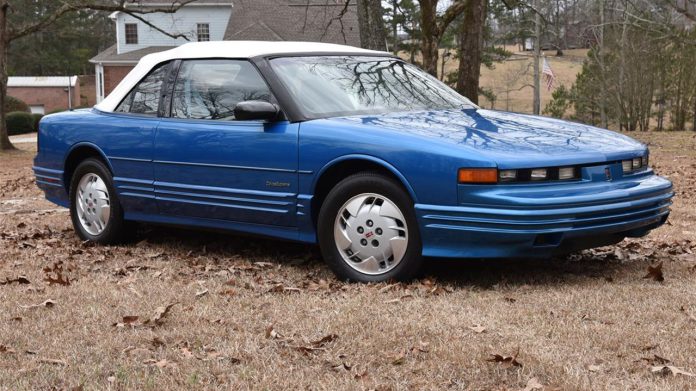 The Pick of the Day is a low-mileage 1992 Oldsmobile Cutlass Supreme convertible listed for sale on ClassicCars.com by a private seller in Buford, Georgia.

“This Cutlass Supreme convertible is a very nice one-owner, low-mileage car with a recent new convertible top. It has always been garaged and the paint and interior look very good,” the listing states.

The Cutlass Supreme model first slotted as a premium offering in the Cutlass lineup beginning in 1966. It was offered in rear-wheel drive through its first four generations. In 1988, the car was moved to the GM10 W-body platform, sharing the same wheelbase as the Buick Regal and the Pontiac Grand Prix. A convertible was a popular configuration for this generation.

Showing just 77,832 miles on the odometer, this 1992 Cutlass Supreme wears a blue finish with a white retractable top. With the top down, the car’s prominent rollbar is featured. As was typical with many General Motors cars of this era, the exterior is dressed in generous body cladding, and a dual exhaust system out back harkens to the car’s sporty aspirations. One of the unique design elements of the car is its “mini quad” headlamps that were introduced in 1992.

Under the hood, power comes from a 3.1-liter multi-port fuel-injected V6 mated to a console-shifted four-speed automatic. At 140 horsepower, the Cutlass Supreme wasn’t much of a hot rod but performance was respectable for its time. This same “LH0 T-Code” engine was also found in the Buick Regal, Chevrolet Beretta, Pontiac Sunbird, and various other General Motors models.

The seller concludes by stating that the car has ample power and is fun to drive. “It was recently inspected and serviced by a reputable mechanic, and it runs great.”

The seller is asking $5,900 for this well-kept drop-top Cutlass. To view this listing on ClassicCars.com, see Pick of the Day.