Formerly owned by Al Jardine of the Beach Boys 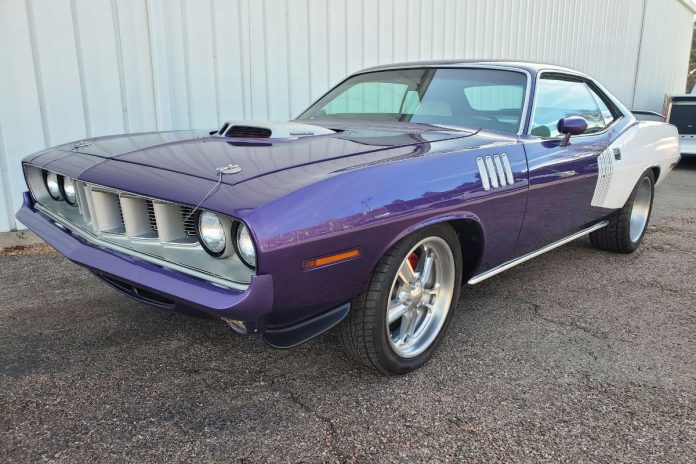 The 426 Hemi is the performance engine to which all other engines are compared. Starting in 1964, the Hemi won 1-2-3 at Daytona. It also made a name for itself in sanctioned drag racing. When the Street Hemi arrived for 1966, it brought its legendary prowess to Everywhere, USA, behaving more like a tamed race car than a hot sedan. Car and Driver magazine once said that the “Hemi … has more pure mechanical presence than any other American automobile.” Some folks claim the 440 Six Pack was faster, and it’s quite possible that, all things being equal, it’s consistently faster through the traps — blame the high-end nature of the Hemi’s power band for that — but beware the owner who knows how to tune and drive a Hemi. This engine in a ‘Cuda is arguably the most desirable muscle car from the era, especially the 1971 version with its long list of appearance options that wild it up.

The Beach Boys may have started out as teeny-boppers, but they ended up as part of a triumvirate of 1960s music that included Bob Dylan and the Beatles. Brian Wilson quickly discovered that his bedroom was more interesting than a stage, so add some drugs, mental illness, and a musical escalation and you have a band that moved the goalposts and got everyone to make better music in its wake. Al Jardine, rhythm guitarist and vocalist for the Beach Boys since 1963 and member of the Rock and Roll Hall of Fame, can claim he was there through it all, thick and thin.

So we see no irony in the most desirable muscle car owned by a member of one of the most esteemed bands ever. Truth be told, Al’s ‘Cuda is a recreation of sorts, originally a ‘Cuda 340 from the factory. He commissioned the build in 2009 but eventually sold the car, with the new owner having the drivetrain refurbished by Lanier’s Speed Shop in Colorado. The rebuild included an Ohio Crankshaft rotating assembly with a 4340 forged stroker crank, Keith Black pistons, stainless valves, 1.57 roller rockers, cc-matched chambered cylinder heads and Schneider Racing camshaft, among other upgrades. Cubic inches now measure 477, with the Hemi having dyno’d at 494.3 horsepower and 570.7 ft-lb of torque.

That power is harnessed by the original 727 TorqueFlite automatic and 3.23 gears. Exhaust gases lead to dual 2.5-inch Flowmasters. Brakes have been upgraded to Wilwood Dynalite on all four corners, helping the ‘Cuda stop in a manner that would impress Consumer Reports magazine. Mags are custom-built 18-inch CNC-machined Budnick Wheels. All this is wrapped in “FC7” In Violet paint with white interior and matching “Billboard” decals, plus painted bumpers front and rear.

With less than 500 miles since the rebuild, this Hemi’Cuda is ready for someone to hop in and bruise some asphalt with “Good Vibrations” blasting through the cellphone (buying a factory-correct cassette player is up to you). A good match? If you agree with the case I’ve made, then you are a prime candidate for this 1971 Hemi’Cuda recreation, which is available with no reserve at the 2023 Barrett-Jackson Scottsdale Collector Car Auction on Friday, January 27, 2023.