Custom treatment for this vintage Lightning 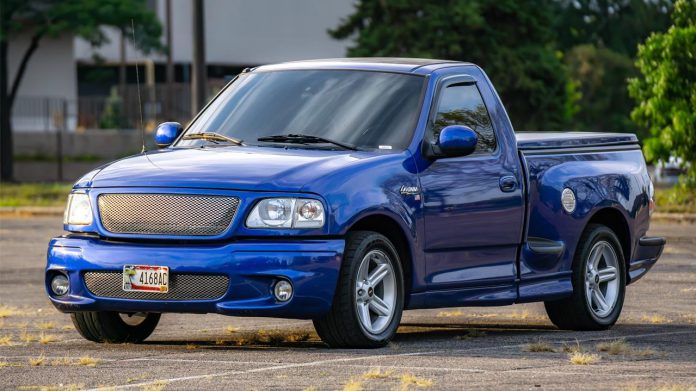 The Ford F-150 Lightning has been in the news a lot lately, as Ford’s full-electric pickup has taken the roadways by storm (get it?). But we think a Lightning that’s 20 years old deserves a closer look, too.

The Pick of the Day is a 2003 Ford F-150 Lightning listed for sale on ClassicCars.com by a private seller in Edina, Minnesota. (Click the link to view the listing)

“Wow! Your chance to own a piece of Ford history,” the listing begins. “This 2003 Lightning is the real deal. It has less than 1,000 miles on a fresh documented motor build.”

The Lightning model was originally tuned by Ford’s Special Vehicles Team (SVT) and first launched as an available variant of the 9th generation F-Series in 1992. That truck used a 240-horsepower version of the 5.8-liter Windsor V8 and was offered in black, red, and white exterior colors between model years 1993 and 1995.

The Lightning name was later resurrected in 1999 and produced in a regular-cab, rear-wheel drive configuration. This time, it leveraged the F-150’s 5.4-liter Triton SOHC V8 that was upgraded with an Eaton M112 supercharger. Ratings for the powertrain were 360 horsepower and 440 lb-ft of torque. And enhancements didn’t stop with the drivetrain, as the Lightning also received a locking rear differential, unique front and rear fascias, model-specific wheels and tires, and heavy-duty shock absorbers.

This blue Lightning from 2003 has received some custom treatment in the form of mesh grilles, window visors, a color-matched tonneau cover, and a sound system that reportedly totaled over $16,000 in receipts alone. The head unit is a touchscreen, and the photo gallery shows custom speaker enclosures added for the door panels, behind the seats, underneath the seats, and even in the cargo bed.

The biggest question on my mind is, why would anyone want to drown out the growl of the exhaust sound from those awesome side-exit pipes? Regardless, we’re sure this Lightning sounds amazing both inside and out.

The asking price is asking $40,000 or best offer. Let’s hear it in the comment section: what songs would your road trip audio playlist consist of? And would you rather drive this, or the modern 2023 EV version?

“Be the biggest badass on the road with this 2003 Ford SVT Lighting!” the seller concludes. To view this listing on ClassicCars.com, see Pick of the Day.