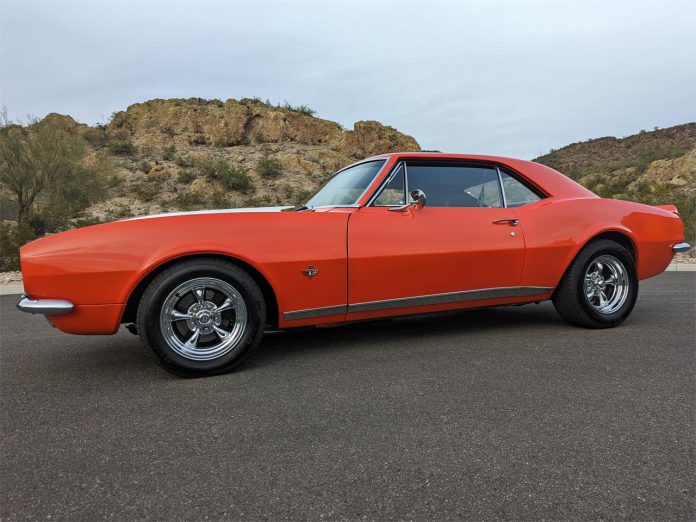 The first Camaro was shown at a press preview in Detroit on September 12, 1966. The public saw the car two weeks later. Later that month, it went on sale for the inaugural 1967 model year, and the automotive world was never quite the same.

The Pick of the Day is a 1967 Chevrolet Camaro RS listed for sale on ClassicCars.com by a private seller in Phoenix, Arizona. (Click the link to view the listing)

The Camaro shared its General Motors F-body platform underpinnings with the Pontiac Firebird with body styles available in convertible and coupe configurations. Some of the car’s engineering was shared with the Chevrolet Chevy II Nova, and manufacturing plants were in Norwood, Ohio, and Van Nuys, California. The car’s core mission from the very beginning was to go after the Ford Mustang pony car.

“Brand new, with nearly everything inspected, replaced, or rebuilt. Build photos, shop invoices, and receipts included,” the seller states. “Unlike most fresh builds on the market, this was not a quick flip project where many corners were cut.” There are photos in the listing showing the build progress.

Under the hood of this Camaro, torque comes from a modified 383cid stroker V8 with performance aluminum heads, a roller cam, and a cast steel crank. The seller states that a dyno sheet for this powertrain shows its output as 480 horsepower and 452 lb-ft of torque. Performance upgrades include a Holley 750cfm carburetor, an aluminum intake, and dual Flowmaster mufflers. We bet it sounds as good as it looks.

The list of upgrades continues from there, showing that work has been done to the suspension, the braking system, and the interior. Among the checklist are lowering springs, power-assisted disc front brakes, and Vintage Air climate control. This muscle car is ready to rock and roll.

Best of all, the engine comes with a transferable 30-month, 50,000-mile warranty for added peace of mind.

The seller is asking $74,998 or best offer for this fully restored first-year Camaro.