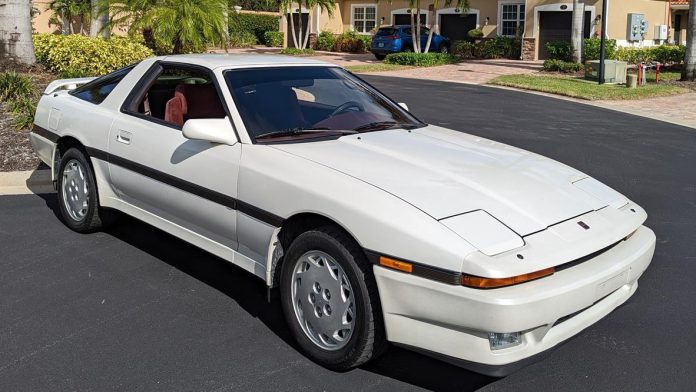 The term Supra comes from a Latin prefix that means “above” or “beyond.” This makes it a fitting name for Toyota’s halo grand-touring sports car when it debuted in the late 1970s, and even today, a well-kept Supra can be a hot commodity in the collector-car marketplace.

The Pick of the Day is a 1987 Toyota Supra Turbo listed for sale on ClassicCars.com by a private seller in Bonita Springs, Florida. (Click the link to view the listing)

“Pristine condition. Original equipment throughout,” the listing states. This garage kept Supra looks good even at nearly 36 years old. It has reportedly been cared for by just one owner since 1988.

This pearl white car comes from the model’s third generation which debuted in 1986. That was the year when the Supra officially took on a standalone nameplate separate from the Celica: the Celica transitioned to a front-wheel drive configuration, while the Supra stayed rear-wheel drive.

Power for this generation of Toyota’s grand-tourer originally came from a 3.0-liter inline-six, but a turbocharged variant (such as today’s example) was offered the following year in 1987. This model became known as the A70 Supra Turbo, and its output was rated at 231 horsepower and 240 lb/ft of torque. Those were strong numbers for the car’s era, and torque was fed rearward through a console-shifted five-speed manual transmission.

The seller states that the car’s original radio and cassette player were no longer working, so a newer Bluetooth device was added. While the car does have some miles on the odometer at about 150,000, it’s rare to see a Supra of this vintage that hasn’t been modified to the point of no return. The photo gallery that accompanies the listing shows clean finishes both inside and out, complete with Supra-branded embroidered burgundy floormats to complement the rest of the interior.

This Supra’s body style remained in production through the end of model year 1992, after which the more curvaceous A80 fourth generation Supra made its debut.

The seller is asking $18,500 or best offer for this well-kept Supra Turbo.