S-Klub LA’s Le Bleu the ultimate in vintage and modern? 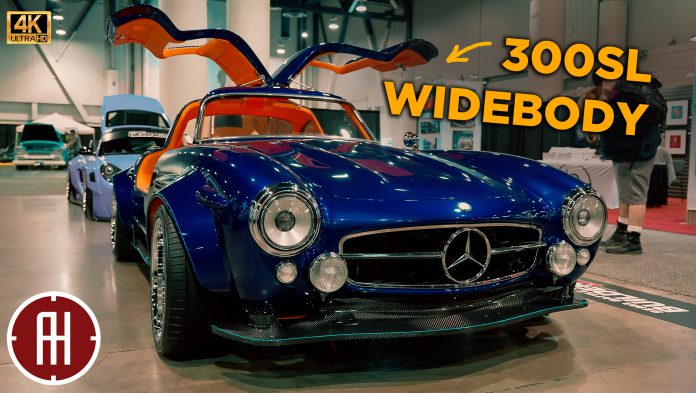 Were you aware that there is a company called that makes fiberglass Mercedes 300 SL bodies? S-Klub LA’s modern take on one of the most desirable cars in the world is actually within arm’s reach to the average hot rodder … well, I take that back considering their website shows no prices — a sign that if you have to ask, you can’t afford it. But at least it’s not as expensive as a real 300 SL Gullwing, right?

The Los Angeles-based company brought their latest creation, christened “Le Bleu,” to the SEMA show last month. The fiberglass body has been widened and fit over a second-generation (2004-11) Mercedes SLK 55 AMG donor. The 355-horsepower 5.4-liter V8 powering Le Bleu offers performance that Fangio only dreamed of when he was racing for Mercedes. Of course, as a company building bespoke 300 SL-inspired vehicles, S-Klub LA implemented custom touches inside and out that provide the vintage look with modern components.

Tag along with Jalopy Jeff and AutoHunter’s Brad DeSantis as they pour over S-Klub LA’s 300 SL widebody that features an impressive tangerine interior befitting of an athlete with too much money. Note the luggage set, which was inspired by the original and which sits between two speakers for those moments when phat Master P beats are de rigueur.