Bill Graves Sr. received the The CPP AutoCrosser of the Year Award 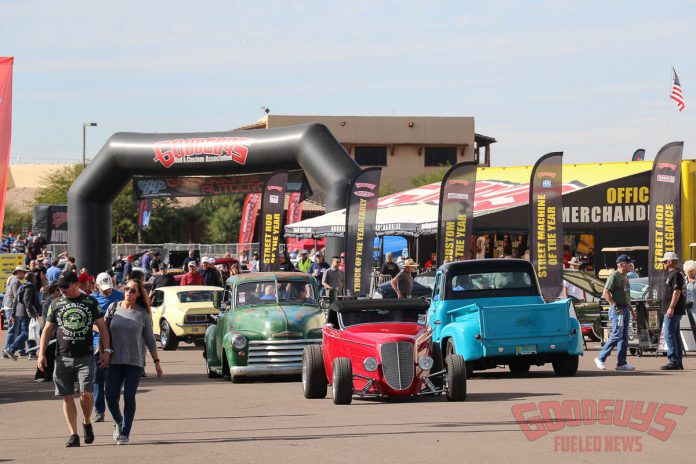 Goodguys concluded its 39th year in operation at WestWorld of Scottsdale for the 25th Speedway Motors Southwest Nationals. It was a chance to see winners of the “Top 12 of the Year Awards” on display and witness the culmination of the yearlong Goodguys CPP AutoCross racing series.

The CPP AutoCrosser of the Year Award, presented by Classic Performance Products, was also announced, adding Bill Graves Sr. of North Carolina and his 1963 Chevrolet Corvette to the “Top 12” feature section. The award goes to the 2022 autocross season competitor with the highest overall points total following the final two events in Scottsdale. Graves took this year’s AutoCrosser of the Year title after earning more points throughout the 2022 season than any driver in any other class. The award-winning racer showed his dominance by qualifying in the top spot for the Forgeline Street Machine class of the “Duel in the Desert” field, further advancing over other competitors and finishing the race with a 35-second lap.

Goodguys CPP AutoCross Series racers faced a new format for the final competition in Scottsdale this year with eight-car “Duel in the Desert” shootouts for each competitive class. When these shootouts were complete, the winners were Jared Leisinger in the Speedtech Performance PRO-X class, Eric Sheely in the Summit Racing PRO class, Ryan Mathews in the Gearstar Sports Car class, Bill Graves Sr. in the Forgeline Street Machine class and Dustin Reed in the LMC Truck class.

In addition, the all-new “King of the Desert” shootout commenced on Saturday afternoon, made up of the eight fastest vehicles of the weekend, regardless of class. The ladder included qualifiers from the PRO-X class, the PRO class, the Sports Car class, and the Street Machine class. It came down to a familiar final round – brothers Jared and Josh Leisinger facing off in their Summit Racing-sponsored Corvettes. Josh claimed the win in an especially tight final lap, running a 33.232 to Jared’s 33.284 – a .052-second margin of victory. The weekend racing action concluded on Sunday with the Tremec All American Action resulting in Gunnison Jones topping the field and winning the shootout.