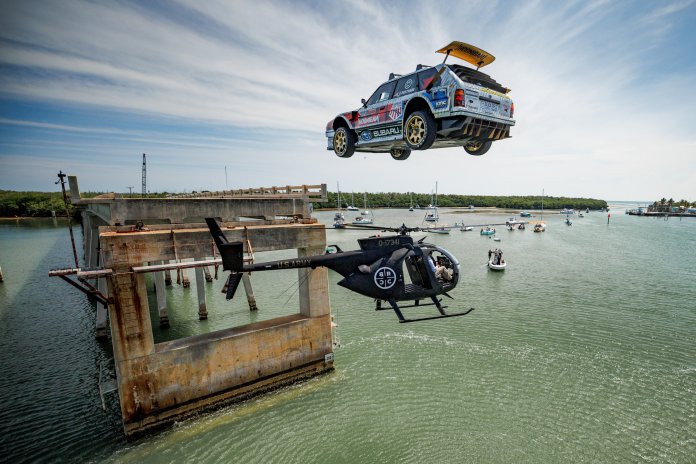 It’s been well over a decade since rally driver and entrepreneur Ken Block released his first Gymkhana video, which starred a rally-prepped 2006 Subaru Impreza WRX STI, and is still thoroughly exciting despite the lack of flair found in later videos in the series.

Block in 2018 finally decided to take a break from doing Gymkhana videos, passing the keys instead to fellow rally driver Travis Pastrana for the 11th installment in the series. Pastrana is now back for yet another installment, Gymkhana 2022, which was released on Tuesday, and was filmed in Florida.

Pastrana’s ride is a 1983 Subaru GL wagon dubbed the Family Huckster. Designed with help from Subaru Motorsports USA, the wagon generates 865 hp from a heavily tuned turbocharged 2.3-liter flat-4. It also borrows aerodynamic tricks from the Subaru WRX STI Airslayer, the one-off ride Pastrana drove in his previous Gymkhana video. These include flaps that pop up when extra downforce is needed, then retract to help lower grip levels when Pastrana needs the car to slide.

There are other vehicles, too. These include a number of monster trucks, a jet ski on wheels, and a 3,000-hp Chevrolet El Camino belonging to YouTube personality Cleetus McFarland.

Pastrana calls Gymkhana 2022 his wildest video yet, and that’s easy to believe considering it contains 160-plus-mph jumps, antics involving a helicopter, and even a race with a fighter jet. As with previous videos, there are also plenty of hair-raising close misses. It goes without saying, don’t try any of this at home.

The folks behind the Gymkhana series, Hoonigan, have set up a page for all previous videos in the series, as well as a collection of related videos, including Block’s recent Electrikhana video featuring the one-off Audi S1 E-Tron Quattro Hoonitron.